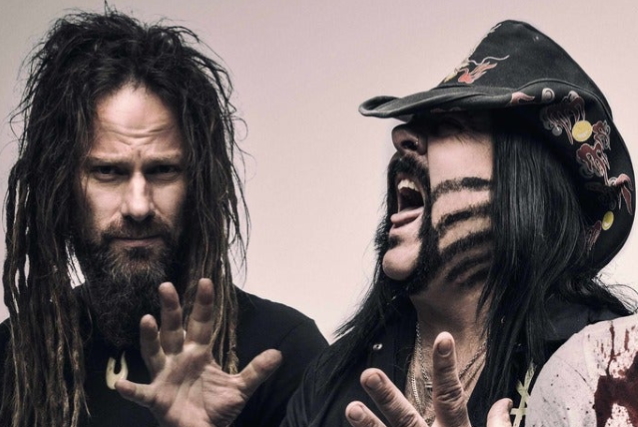 HELLYEAH Bassist: 'It Is Hard To Imagine Doing Another Record Without' VINNIE PAUL

HELLYEAH bassist Kyle Sanders spoke to "Rock Inc" podcast host Sean Knight about what it has been like touring without the band's drummer, Vinnie Paul Abbott, who passed away a year and a half ago. "It's been equally awesome and rough at the same time — just a lot of highs and lows," he said (hear audio below). "But the shows are just amazing and the crowds and the fans and the turnout, everything is really good. Leading into it, I was kind of — not dreading it, but it's not something [I was] really looking forward to. But at the same time, it's a beautiful thing. So it's just a roller coaster of emotions, pretty much. But all in all, it's been a huge success — it's been great shows, a great tour."

Sanders was also full of praise for STONE SOUR drummer Roy Mayorga, who stepped in as Vinnie Paul's replacement for the touring activity in support of the "Welcome Home" album. "He's crushing it, man," he said. "We wouldn't have talked to him about doing this if we didn't totally believe that he's the man for the job."

Asked what the future of HELLYEAH is looking like right now, Kyle said: "We're just taking it day by day. Actually, we have discussed writing [new material], just 'cause you're always wanting to put new ideas down, but we haven't even… Personally, I haven't thought about doing another record. I'm not saying it won't happen, but we're just getting through this tour — getting through promoting this cycle and this record. And then we'll see where it goes. We have shows all through, I think, summer right now — a bunch of U.S. stuff, and tryng to get overseas. So, we're just working this record at the moment. We'll see where everyone's head's at when it's all said and done."

Sanders added: "No one wants to stop, but it is hard to imagine doing another record without [Vinnie]. But we also thought it'd be impossible to do a show, much less a tour without him. And we're right in the middle of it now."

Mayorga's addition to HELLYEAH was made official in early May. At the time, the band said Roy was the perfect guy to take Vinnie Paul's place. "These men had so much love and mutual respect for each other, this makes our transition so much easier," HELLYEAH said in a statement.

Not long before his death, Vinnie laid down the drum tracks for HELLYEAH's sixth album, "Welcome Home", which was released in September.