The first photo of HELLYEAH's current lineup — featuring the band's new bassist, Kyle Sanders (former member of BLOODSIMPLE and the brother of MASTODON's Troy Sanders) — can be seen above.

HELLYEAH recently parted ways with guitarist Greg Tribbett and bass player Bob "Zilla" Kakaha. A post at HELLYEAH's Facebook page discussed the split, saying, "Things happen for necessary reasons. It's so easy for people to assume or make up reasons for things. Don't ASSUME anything! The reasons for this parting of ways was for the better good. When you hear the new record, you'll understand."

It's unclear if Tribbett will be replaced.

HELLYEAH's fourth studio album, "Blood For Blood", will arrive on June 10. The first single, "Sangre Per Sangre (Blood For Blood)", will hit rock radio in April.

HELLYEAH is currently filming a video for an as-yet-undisclosed song off "Blood For Blood".

Photos from the video shoot can be seen below.

A press release describes "Blood For Blood" as a "welcome return to form" for the band, adding that it "sounds like a recharged HELLYEAH, taken up many notches."

HELLYEAH will hit the road this spring, starting with several festival slots in April and May.

Montano left a week after the release of the band's self-titled debut album in 2007 and was replaced by Bob "Zilla" Kakaha, who had played with Abbott in DAMAGEPLAN.

MUDVAYNE has not released an album since 2009 while Gray and Tribbett have been working with HELLYEAH. 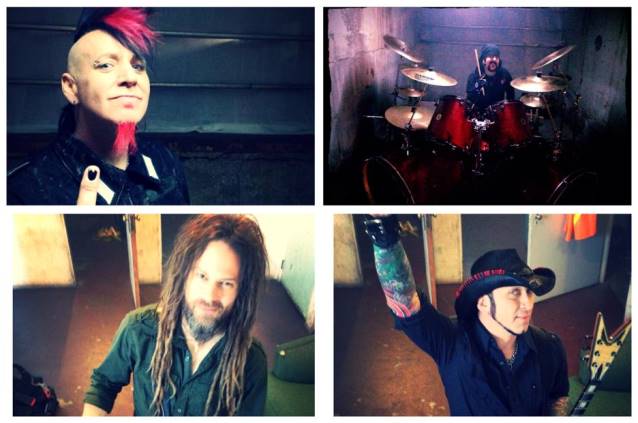