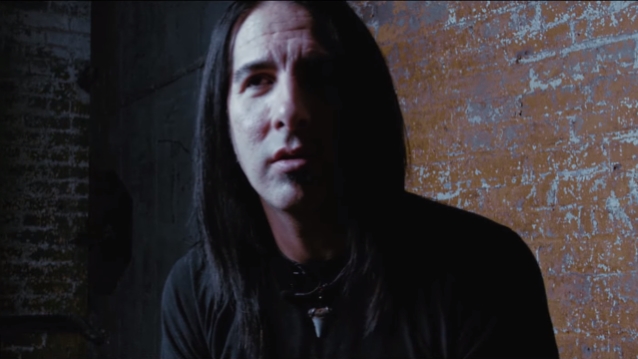 HELLYEAH's CHRISTIAN BRADY On Band's Future: 'I Would Love To Be Able To Continue On'

Christian Brady says that HELLYEAH's future is uncertain as he and his bandmates continue to mourn the death of their drummer, Vinnie Paul Abbott.

Vinnie Paul passed away in June 2018 at the age of 54 in his sleep at his home in Las Vegas. The official cause of death was dilated cardiomyopathy, an enlarged heart, as well as severe coronary artery disease.

Vinnie recorded a total of six albums with HELLYEAH over the past decade, including the upcoming "Welcome Home", for which he laid down his drum tracks before his passing.

In a brand new interview with Metal Injection, Brady said that no long-term plans for HELLYEAH have yet been made as the band continues the tour cycle for "Welcome Home".

Asked what the future holds for HELLYEAH, the guitarist said: "I don't know if I really can answer that right now. Everything feels really good right now to be playing together again. We're excited to be out here doing this and supporting this record and honoring our brother. I think that's something that we're gonna have to try to feel out as we go along and see where we're at when we're done with this record cycle and see what everybody is feeling."

He continued: "There's a lot of emotions involved. I personally think that I would love to be able to continue on because I couldn't imagine not playing with these guys and making the music we make. Obviously, Vinnie was such a big part of that. There's a lot to that. So I think honestly that's something we're kind of taking day by day right now. We're doing this tour and we're going to support this record and celebrate Vinnie and his legacy. And I think that's something we'll probably really address as we get further down the road and see where everybody's heads are at."

HELLYEAH has just completed a U.S. tour — its first since Vinnie's passing and the debut of STONE SOUR member Roy Mayorga as Vinnie's replacement.

HELLYEAH's 18-city headlining summer outing kicked off on July 23 in Atlanta, and culminated in a special celebration on Saturday, August 17 in Dallas, Texas.

"Welcome Home" will be released on September 27 via Eleven Seven Music.