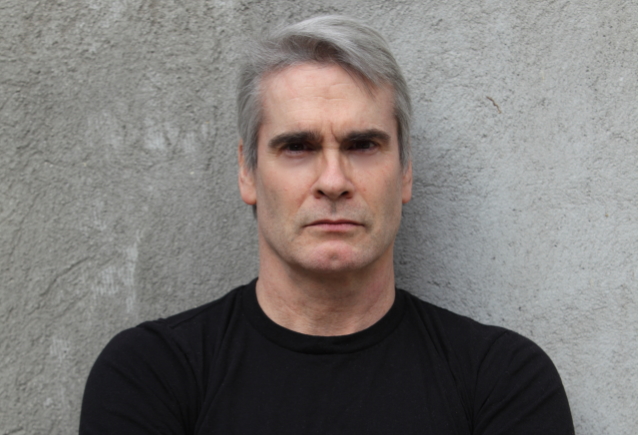 According to the Los Angeles Times, Henry Rollins has listed his home in the Hollywood Hills for $3.9 million. The 60-year-old former lead singer of the pioneering hardcore punk band BLACK FLAG bought the 4,348-square-foot, 5.5-bathroom house in 2009 for $2.2 million.

Victoria Silver of Compass and Jane Schore of Coldwell Banker Realty hold the listing, which describes the property thusly: "Incredible Hollywood Hills, private gated celebrity compound. Drive thru imposing steel gates up a private drive to the roomy concrete jungle motor court. Pull open the massive steel front doors and enter the fabulous 60 foot living room. The main living area features industrial touches such as concrete walls and steel beams, while the rest of the home has a zen, calming feel. Ideal space for entertaining with dramatic formal dining room, open living room, den, bar area and eat-in kitchen. Wonderful outdoor space in addition to a large rooftop patio. This amazing home on 3 levels is also the ideal live/work residence. There is a gym, a vocal recording booth, office/studio areas, den, sauna/steam room, possible screening room and lots more. The luxurious Main Bedroom suite has fireplace and doors that open to a large outdoor patio. So much style. If these walls could talk, they'd probably sing, play guitar or drums. The coolest house in the Hills is ready for its cool new owner."

In describing Rollins, the tendency is to try to squeeze as many labels as possible into a single sentence. "Rollins is many things," says The Washington Post, "diatribist, confessor, provocateur, humorist, even motivational speaker…his is an enthusiastic and engaging chatter." Entertainment Weekly's list includes "Punk Rock icon. Spoken word poet. Actor. Author. DJ. Is there anything this guy can't do?" TV Guide has more concisely called him a "Renaissance Man" but if Henry Rollins could be reduced to a single word, that word would undoubtedly be "workaholic." When he's not traveling, Rollins prefers a to keep a relentless schedule full of work, with gigs as an actor, author, DJ, voice-over artist and TV show host to name a few of the roles that keep his schedule full.

Rollins is the music, the attitude, and the voice that takes no prisoners. In his books, he has led us on a hallucinatory journey through the decades–and his mind — with poems, essays, short stories, diary entries, and rants that exist at "the frayed edges where reality ends and imagination begins" (Publishers Weekly).