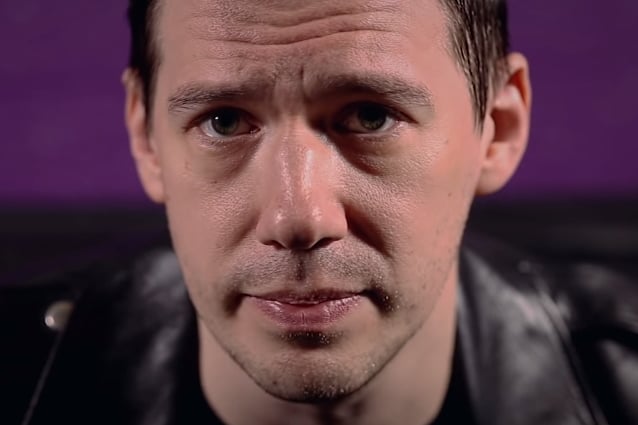 A photo of GHOST mastermind Tobias Forge in full black metal corpse paint at the age of 15 can be seen below. The picture, which was posted to the GHOST fan Facebook page School Of Ghoul, originally appeared in a 1996 issue of a fanzine titled Scriptures Of Malignancy, which interviewed Forge about his then-band SUPERIOR.

SUPERIOR was one of several groups Forge formed before he started GHOST. At the time, he went by the stage name of Don Juan Leviathan.

"Forge was interviewed by the zine and from reading this we learned that he was in a band called ABSURDUM in 1994 aged just 14," reads the message in the School Of Ghoul post.

"Tobias played in a series of bands in 1995 which he refers to as 'unserious shitbands' and in August 1995 he decided to change the name of ABSURDUM to SUPERIOR.

"There were two SUPERIOR demos called 'Metamorphis' (1996) and 'Illustrare Ad Infernali' (1997). It's now come to light that there was an earlier demo recorded for SUPERIOR in 1995 called 'Anno Dracule (Dark Wampyrious Consipracy)' but it was never released. Seriously, that's the name of it!

"He also played a few rehearsals with a black metal band called MALIGN. This band released a demo tape in 1996, called 'Livextirpation', but Forge wasn't on this tape or ever recorded any tracks with MALIGN as his time in the band was short lived and he was never an official member."

Some of Forge's other early bands include death metallers REPUGNANT and alt-rockers MAGNA CARTA CARTEL. The latter featured Martin Persner and Simon Söderberg, who would later appear as Nameless Ghouls in the first incarnation of GHOST.

If you've ever wondered what Tobias Forge would look like as a 90s black metal guitarist then here you go. Here is 'Don...