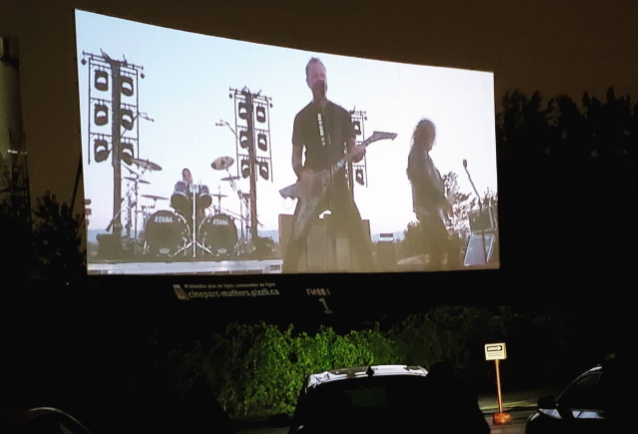 Here Is What METALLICA's First Drive-In Concert Looked Like

On Saturday night (August 29),METALLICA broadcast a show to hundreds of drive-in and outdoor theaters across the U.S. and Canada, as part of the "Encore Drive-In Nights" series. The concert was filmed nearly three weeks earlier, on August 10, at the Gundlach Bundschu winery, about a 30-minute car ride from the band's headquarters in San Rafael, California, and was subsequently edited and mixed by the band's award-winning production team to the highest standards possible.

Attendees were able to listen to the show through their FM radio or over the faraway speakers.

"What people don't realize is that is a far clearer version of audio than the normal stacks and racks that you would see at a show," Walter Kinzie, CEO of Encore Live, told the Albuquerque Journal ahead of the event. "And so the audio will be crystal clear. It was all produced in HD stereo format so it will be an absolute perfect combo for your FM station in your truck and your car and just crank it up and get ready and I'll tell you that's part of the magic of that evening is when you're in there with a couple hundred cars and everyone has got their radios cranked up and it's all to the same station it creates this real magical kind of atmosphere that's a hell of a lot of fun and super rowdy."

According to the Sonoma Index-Tribune, less than half a dozen locals were made aware that the biggest heavy metal band in the world was set up overlooking the vineyard of the Sonoma winery secretly performing some of their biggest hits without an audience.

The band rehearsed for two weeks at their headquarters while the METALLICA crew stayed in 30 rooms at Sonoma's El Pueblo Inn for almost two weeks. Everyone was subjected to repeated COVID testing before METALLICA played the secret concert without any of their fans in attendance.

"It feels good to play again," METALLICA frontman James Hetfield said during the show. "We're not sure what everyone out there has been doing, but I know they've been listening to music and they've been praying and praying for something live they could grasp on to. Because music helps us through all things, including this."

METALLICA guitarist Kirk Hammett told Uproxx about the concert: "We filmed the actual drive-in show about two weeks ago, at a secret location in Northern California. And it was the first time that we had gotten together since [last September's] 'S&M' shows. It was really important for us to be able to come together and play that particular show, because we needed to just get some sort of semblance of, if we're going to go forward in the future, how that was going to look with the pandemic going, and all of these safety protocols. We adapted this whole safety protocol so that we were able to work at HQ, and rehearse without us having any fears of being infected, or infecting other people. What that meant was getting tested for COVID, literally every other day. That week of rehearsal, I got tested for COVID five times… It also meant that our entire crew had to have face masks on. A double face mask, which was a paper mask and an N95 mask, [plus] a face shield, and a raincoat, and gloves, and sanitize, and just spray our guitars. That was while we were rehearsing. While we were filming, we were the only people in the whole place without masks on. Everyone else had masks on. And everyone, from the crew to us, had been tested, and quarantined as well. We were able to do that, and do that successfully without any health flare-ups, or any obvious sort of potential of getting infected. So that kind of set a precedent for us moving forward. It gave us hope, knowing that with all this that’s happening right now, if we need to, we can still get together and function as a band."

Asked what fans should expect from the resulting feature-length film, Hammett said: "Full balls-out METALLICA show. We're filmed playing outside, and it's everything you should expect to see from us. We walk out on stage and play our music. It's just the 2020 version. If anything, it's a document of us playing in this time. And it's also an opportunity for us to just put something out there for the people who are bored, and for METALLICA fans who need something to do. I know I'm constantly looking for something to do. And so this is our way of going out there and just giving people something."

Thank you to everyone across North America who rolled out to their local drive-in last night. It was amazing getting...

@Metallica never disappoints, even at the drive-in! 🤘🔥 #Pandemicapic.twitter.com/o4TGQ5X751

Oh Man. I love my job. Bringing people from all over AB to see #Metallica to little ‘ol Raymond on our “Drive-in” screen. What an amazing time #encorenightspic.twitter.com/oQjkxF0EoG

LOVED the Metallica concert at the drive-in tonight! Had a blast!!!
🤘🔥🤩💥🖤#MetallicaAtTheDriveIn#MetallicaDriveInpic.twitter.com/1S0Acfb1rj

Couldn't be a better night for Metallica at the Drive-In pic.twitter.com/BGHC6T0awY

Hangin' w/ #Metallica at the drive-in! Thanks for the #pandemic break, at least for a night. Good to see you again! pic.twitter.com/FQih0w86Pw

Tonight I got to go to a drive-in concert of Metallica with Three Days Grace. It was great, something different than going to an actual concert but a nice thing to have in a time like this pic.twitter.com/l7ftKEEeVs

Metallica live at the drive-in. Great night out with the fam. 🤘😁🤘 pic.twitter.com/brxXgX0e2J

The @Metallica Drive-In Concert was awesome! They played a killer set. Got there early and got a great spot. I even met photographer Mark Weiss who basically captured all of rock music from the 80s and got his book signed. #MetallicaDriveIn#Pandemica 🤘🏼⚡️ pic.twitter.com/Q3gAz7iMfv

I hit the Metallica drive-in concert tonight. Had a head-bangin’ hell of a good time. James can actually still bring it folks. Some of my photos and my free S&M 2 disc CD given to the first 20 cars! San Diego Baby.......🤘 pic.twitter.com/7faJNeJz2W

The #Metallica Drive-In concert is a balm for my ears and my metal soul. Even the 4 year-old loved staying up for it despite his "no paparazzi" policy and his request to listen to Prince's Purple Rain on the long drive home. Thank you, @Metallicapic.twitter.com/2i9UHN9i89

@Metallica but socially and responsibly distanced at the Drive-In! So cool under moon finally! pic.twitter.com/DPiGJfrWrF

This @metallica drive-in show is the happiest I’ve felt in months pic.twitter.com/jCDl66cQR1