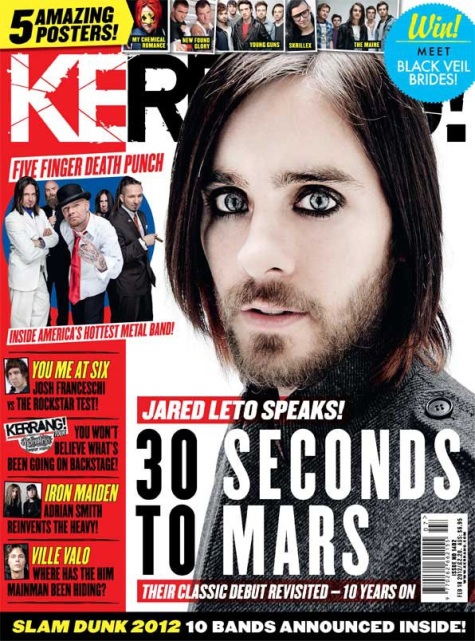 HIM Frontman: 'I Want To Recapture Some Sense Of Mystique'

Vocalist Ville Valo of Finnish "love" metallers HIM recently spoke to U.K.'s Kerrang! magazine about what he and his bandmates have been up to in the two years since the release of their seventh and most recent album, "Screamworks: Love In Theory And Practice".

After it was revealed in March of last year that HIM had parted ways with Sire/Warner Music following a six-year partnership that produced three albums, the band closed down its official web site, with the rest of 2011 seeing virtually no activity from HIM at all.

"I know that things have been really quiet of late," Ville told Kerrang! "But our drummer [Gas Lipstick] has suffered a music-related injury — at least that's what he says it is. He has nerve damage and it's been a problem for about a year now; obviously it's been terrible for him, but it's also been stressful for the rest of the group. You can't make rock music without a drummer."

On the split with Warner Music, Valo said, "The thing with Warner is really a kind of a familiar story. When we signed with [the label], there were lots of people there who really loved the band, loved what we were doing; people who worked hard for us and who really had our best interests at heart. And now, of course, all of those people have left the company. So instead we had a bunch of people that we didn't know, who didn't know us, and who we felt didn't really understand what we are about and how to best represent us. All of a sudden, it felt like we didn't have a home anymore. It was time for us to move on."

When asked about whether he is worried about HIM's standing and profile in the rock music world after spending most of the last year away from the spotlight, Ville said, "I don't know, you tell me — should I be worried? This break we've had has had its benefits, in that it's made me think about where we were going as a band. That's why I shut down [the official HIM web site], because it was becoming too commercial, it was becoming just about selling t-shirts.

"There seems to be very little mystique in music at the moment," he continued. "And I really miss that. I want to recapture some sense of mystique, if I can. I want to make music that goes back to when we were directly influenced by BLACK SABBATH, which I can imagine would have been very confusing to the people who work at Warner Brothers and who would be complaining that they couldn't get this played on the radio. Who cares? I don't. I'd like the album to be released on Rise Above [the cult, underground doom metal label owned by CATHEDRAL singer Lee Dorrian]. I think that would be great. We could get it back to being just about the music, about the mystique; we'll get back into people's faces in the best possible way and remind them exactly what we're capable of."

HIM's discography on Sire includes the 2005 album "Dark Light", which was certified gold in the U.S. for sales in excess of 500,000 copies. Follow-up releases "Venus Doom" (2007) and "Screamworks: Love In Theory And Practice" charted both in the U.S. and Europe.

"Screamworks: Love In Theory And Practice" sold 26,000 copies in the United States in its first week of release to debut at position No. 25 on The Billboard 200 chart. Recorded at The Lair in Los Angeles, the CD was produced by Matt Squire (TAKING BACK SUNDAY, THE USED, SAOSIN) and mixed by Neal Avron (LINKIN PARK, WEEZER, FALL OUT BOY).