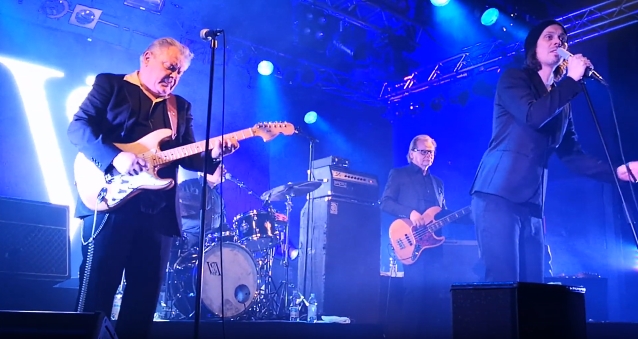 VILLE VALO & AGENTS, the band led by guitar legend Esa Pulliainen and Ville Valo, the frontman of the recently disbanded Finnish rock act HIM, performed on April 6 at Hullu Poro Areena in Levi, Finland. Fan-filmed video footage of the concert can be seen below.

The self-titled album by VILLE VALO & AGENTS, based on songs by the late, legendary Finnish singer Rauli "Badding" Somerjoki, was released on February 15. The accompanying tour includes fresh interpretations of such Badding classics as "Tähdet Tähdet", "Paratiisi" and "Ikkunaprinsessa", as well as the songs from the album, including the first single, "Orpolapsi Kiurun".

"The AGENTS have been a working band since 1979, so this VILLE VALO & AGENTS tour is tour number… uh, I don't know, lost my count already," Pulliainen chuckles. "I myself started playing live in '74, when I was barely seventeen — that means that next summer marks my 45th anniversary on the road. The venues and the roadside views have become pretty familiar during those years, but I confess that this time 'round, I'll surely have a few butterflies in my stomach. We'll be touring with the Black Prince himself, Ville Valo!"

The tour will be a one-off collaboration. This means that these upcoming shows offer a truly unique opportunity to witness VILLE VALO & AGENTS live on stage for the first and last time ever.

"It will be a pleasure and an honour to serve under Captain Pulliainen — and his merry crew! — on this one-time-only exploratory journey through the Finnish wilderness, heading into the blue and white heart of melancholy," Ville says.

VILLE VALO & AGENTS made their live debut at Emma Gaala, the Finnish equivalent of Grammy Awards, in February.