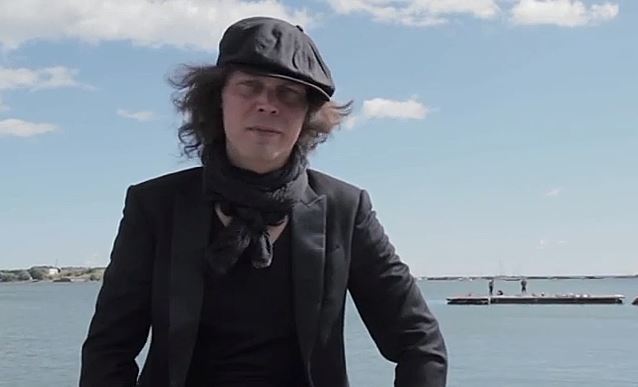 CrypticRock.com recently conducted an interview with vocalist Ville Valo of Finnish love metallers HIM. A couple of excerpts from the chat follow below.

CrypticRock.com: HIM is now internationally known and your logo branded all over. "Dark Light" [2005] was the height of the band's success in the USA. The album went gold in various markets. Riding high from that success, you guys have released three albums since then. Was your approach to the music different at all after the success of "Dark Light"?

Ville Valo: Not really. It would be better to ask did our approach changed before "Dark Light". I think that, usually, with any band that has any success, they don't know why they have success. Bands, in general, work hard and you should do what you feel is the best, go with the flow, and trust your instincts. That is basically what we did with "Dark Light". It paid off, and that's basically what we continue doing. Obviously, the whole world of music keeps on changing. You meet your new favorite band every day of the week. We haven't been getting much radio air play after that, for example, in the States. Still, we've been touring successfully, and still there seems to be a lot of people that enjoy what we do and enjoy following us around, which is pretty amazing.

CrypticRock.com: The band has a very strong following internationally. Your newest album, "Tears On Tape", is really excellent. Personally I respectably think it's one of the strongest albums of all your work. Tell me what the writing and recording process was for the new album?

Ville Valo: It was a bit of a pain in the butt. We started working with stuff in early 2011 and worked at the rehearsal place to get some ideas down. All of a sudden, our drummer, Mika "Gas Lipstick" Karppinen, started feeling severe pain in his hands. Everybody was kind of shocked and worried, thinking, "What the hell is going on?" He went to the doctor's and found out he had some repetitive strain injury and some nerve damage as well. Nobody would actually know how long it would take him to heal up or whether he's ever going to play drums again. In the middle of the start of "Tears On Tape", we all of a sudden had to take a break for eight months to wait for him to get better. We utilized the eight months to work on the songs a hell of a lot more than maybe in the past. At the end of the day, I think it paid off. When Gas was fine again, and he got the A-OK from the doctor's in May 2012, everybody was so relieved. That was a huge boost of confidence for everybody in the band. We started working at stuff straight away and worked our asses off May-August and went into the studio in September. It worked itself out pretty quick; it was about two and a half months of recording and your usual two weeks mixing and so forth. We have done that a couple of times in the past, so that part of it wasn't really new. The toughest thing was to have the mood and setting right for the music.

CrypticRock.com: Finland is loaded with metal bands, ranging from black metal, to death metal, to gothic metal. Being from a country with such a strong metal scene, and especially so many gothic metal bands, what do you think the key to HIM's success is standing out above all these bands?

Ville Valo: I think that more or less the scene, as you said, has always been big, but there has never been a lot of bands doing exactly the "same old same old." When we started out, there were bands like CHILDREN OF BODOM and NIGHTWISH and bands like that. I think all the bands have really strong identities of their own. Even though we were in the same scene more or less, all the bands sounded very different. We weren't fighting; it was more of a family sort of thing rather than be bitter enemies.

CrypticRock.com: HIM's lyrical and music theme is very sorrowful and romantic. Tell me what inspires you to compose the lyrics and music?

Ville Valo: Yes, I think all good music has to come from a personal place. Again, it's the combination of when we started out, we didn't just want to play gothic rock or just want to do metal. We wanted to, if possible, mix all we love into this package called HIM. That's probably the reason for the way we sound, good or bad. Songwriting-wise, I'm a huge Neil Young fan, Johnny Cash, DEPECHE MODE and all sorts of different acts. Usually we are into melancholy music, but I guess that's very Scandinavian. We don't listen to a lot of happy-go-lucky bullshit.

Read the entire interview at CrypticRock.com.