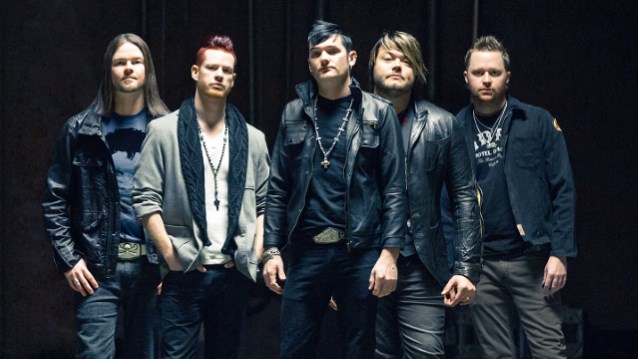 "Rather Hate Than Hurt", a brand new song from Oklahoma City rockers HINDER, can be streamed in the YouTube clip below. The track is taken from the band's new full-length album, "When The Smoke Clears", which will be released on May 12.

According to The Pulse Of Radio, HINDER recently replaced its lead singer for the second time in less than two years. After recruiting Nolan Neal to replace original frontman Austin Winkler following the latter's departure in late 2013, the band announced that Neal himself was shown the door. In a post on Facebook, the group revealed that their new vocalist is Marshal Dutton, who also happens to be the co-producer on several of their records.

The band's statement said: "As our loyal and beloved fans know, we have been searching to find the perfect fit for two years now and recently came to realize that it was right under our nose the entire time. Marshal has been a part of the HINDER family since 2009, when he began co-writing/producing on the 'All American Nightmare' album. He has been a co-producer on every HINDER release since, and truly loves this band as we do. We have been the best of friends for many years and we couldn't be more excited for the future!"

Dutton previously sang for HINDER on some tour dates during Winkler's hiatus from the band in 2012.

After Winkler left for good in November 2013, the band recruited Neal to take his place. A single, "Hit The Ground", was released last fall with Neal on vocals.

Drummer Cody Hanson said about "When The Smoke Clears": "This is the album HINDER fans have been waiting for and they won't be disappointed. We spent a year writing this and we couldn't be more excited for the world to hear it."

HINDER made its debut in 2005 with the album "Extreme Behavior", which yielded the Top 10 smash "Lips Of An Angel".