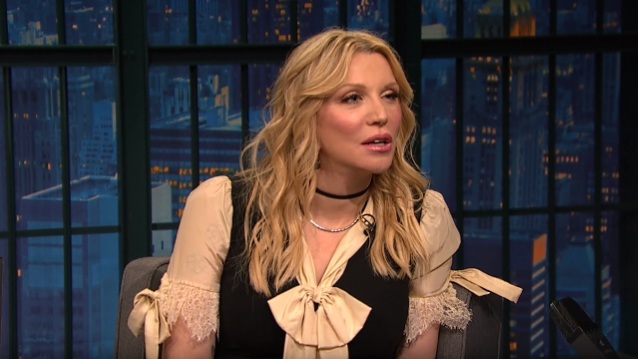 The much-rumored HOLE reunion finally appears to be a reality. On Monday (October 7),Courtney Love posted a since-deleted Instagram photo of her, drummer Patty Schemel and bassist Melissa Auf Der Maur playing together on a studio stage.

Answering questions on Instagram, Love wrote: "ah! We r so rusty. Just finding our way through songs n songs we like n riffs seeing what's what! It's cool. Af nice to be together." When asked about any upcoming HOLE concerts, Love replied with two black heart emojis.

This past May, Love said in an interview with The Guardian that HOLE was considering a reunion to celebrate the 25th anniversary of the band's 1994 sophomore album "Live Through This".

Love revealed: "We are definitely talking about it. There's nothing wrong with honoring your past; I've just kind of discovered that. If you don't, people will rewrite history and you will become an inconvenient woman."

According to The Pulse Of Radio, there has been talk of a HOLE reunion before, most notably in 2014, when rumors that the band — Love, guitarist Eric Erlandson, Schemel and Auf der Maur — would reunite were eventually shot down by Love herself.

Auf Der Maur discussed a possible HOLE reunion, saying she had a positive meeting with Schemel and Erlandson about reconnecting with Love.

HOLE has been largely on hiatus since 2002, although Love released an album called "Nobody's Daughter" in 2010. The quartet reunited to perform for the first time in 15 years at a party in April 2012.