Long-running German thrashers HOLY MOSES will perform at a special concert on December 13 at the ISS Dome in Düsseldorf, Germany celebrating Doro Pesch's 25-year career as the reigning queen of German heavy metal. The concert will feature appearances by:

Performing with DORO will be:

Tickets are available at www.Metaltix.com.

Doro Pesch will release a new single entitled "Celebrate (The Night Of The Warlock)" on October 31 in Germany and November 3 in most of the rest of Europe via AFM Records. The EP will contain three versions of the single's title cut "Celebrate" — including one that features guest appearances by Liv Kristine (LEAVES' EYES), Veronica Freeman (BENEDICTUM), GIRLSCHOOL, Floor Jansen (AFTER FOREVER) and Angela Gossow (ARCH ENEMY), and another that was recorded with the help of Biff Byford (SAXON).

"Celebrate (The Night Of The Warlock)" track listing: 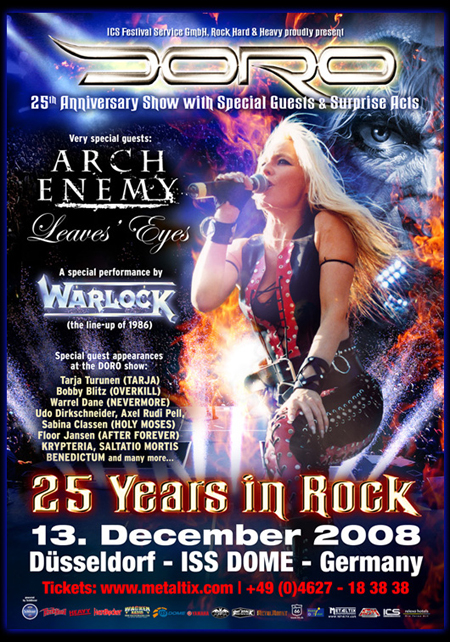