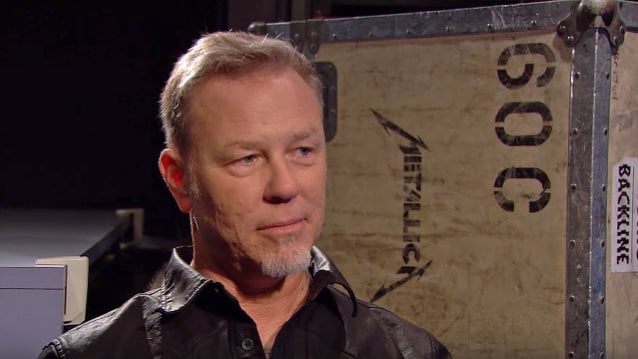 How Does METALLICA Pick Its Support Acts? JAMES HETFIELD Explains

Prior to METALLICA's June 18 concert at Soldier Field in Chicago, Illinois, James Hetfield spoke to WLS-TV about how his band goes about choosing its support acts. He said (see video below): "When we go out and tour, we try and bring bands out that have either done well on their own or we get along with or we just like their music. There's gotta be some connection. It's not, 'Oh, they're hot right now. Bring 'em out.' But you have a history with them, you get along really well. That's one of the main things about touring — just getting along with people. Maybe it happened in the old days, where there's fighting between bands and all this crap. But that's kind of… It's old hat. But as far as bands going out with us now, we've got VOLBEAT, who I think is really great, on some of the legs. AVENGED [SEVENFOLD] is out. There's a band called GOJIRA, who we've had out quite a few times. And, yeah, they're good and they're heavy."

METALLICA is currently on a short break from its first North American tour in more than seven years, which resumes on July 5 in Orlando, Florida.

This tour marks the first time that METALLICA has offered "enhanced" or "VIP" experiences for fans, with some willing to cough up as much as $2,500 for personal meetings, photos and autographs from the group.

Drummer Lars Ulrich told Rolling Stone that METALLICA has proceeded "cautiously" with these packages, saying, "We spent a lot of time seeing what everybody was else doing. 'What's BLACK SABBATH doing? What's GUNS N' ROSES doing? What happens in the pop world?' It felt foreign to us and, dare I say, a little hokey. So we just had to sort of get to a place where we would get comfortable with that."

Paid meet-and-greets are becoming staples of the touring circuit and are seen by some artists as a necessary evil to survive nowadays.