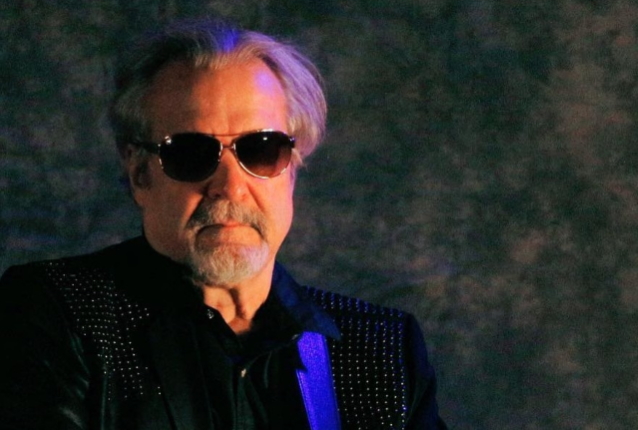 Best known as a founding member and bassist of BLUE ÖYSTER CULT for sixteen years, who also played piano, keyboards and guitar, Joe Bouchard spoke to RockHistoryMusic.com about what it was like to have one of his songs covered by METALLICA. "Astronomy", which was first recorded for BLUE ÖYSTER CULT's 1974 album "Secret Treaties", was interpreted by METALLICA on the band's 1998 album "Garage Inc."

Regarding how he first crossed paths with METALLICA, Joe said (see video below): "I went to see [them play]. This is about 1995. I didn't even know that they knew who I was. But I got a backstage pass. They had everybody held up in the catering room; everybody was in the catering room. I had the nice, sort of, management pass; everybody else had to wait there. So I'm walking down the hall, and I look over. 'Oh, there's the bass player from METALLICA.' I said, 'Jason, it's Joe Bouchard.' He says, 'You're Joe Bouchard?' And he grabs my hand, and he would not stop — he would not let go of my hand. [Laughs] And they were just in front of 20,000 people, and everybody was going crazy. And I felt like I'm not really anybody — I'm just some guy hanging out backstage. So I said, 'Jason, come on down to the catering room. I'll introduce you to the whole room. You can sign some autographs and talk to my friends.' And all my friends from the guitar workshop were there. And [Jason] said [about me], 'That guy meant so much to me.'"

Asked how he found out METALLICA was going to cover the song he co-wrote with his brother, drummer Albert, and the group's producer, the former music journalist Sandy Pearlman, Joe said: "At first, I heard they were gonna record a BLUE ÖYSTER CULT song. It was the early days of the Internet — [and I found out about it through] an America Online chat board. And I said, 'Oh, that's great. They'll probably do '[(Don't Fear) The] Reaper' or one of the usuals.' But then, a couple of weeks later, I found out they were doing 'Astronomy'. [I was, like], 'Wow, that's great.' So I go down to my mailbox, my post box, and there was a cassette in my post box. I took the cassette out and put it in my car, my Datsun old radio, and I'm listening to 'Astronomy' by METALLICA. And I'm going, 'Oh, this is good.; I wanted to jump up and down, but I was driving. But I was really excited. I'll never forget that feeling.

"I mean, some of the fans still love the original version better, but, to me, they did a brilliant job. The hair stands up on the back of my neck when I hear James [Hetfield] singing the melody that I wrote while I was walking on the beach.

"Then we went and we met the rest of the guys. We went to the premiere of the album at a place in New York City, and they were really nice to us, and they were happy that we were happy with the way they did it. Not everybody is happy when you get a cover. Sometimes the cover is [not that great]. [Laughs]"

Speaking about how having METALLICA cover one of his songs affected him, Joe said: "It changed my life — it really changed my life. I was doing all kinds of different things at the time — I was working in a publishing company; I learned the book business; I got my master's degree in music. You know, [I was] doing all this kind of crazy stuff that I wanted to do — go back to college. [Laughs] I heard Rivers Cuomo went back to Harvard after he was a rock star, so I felt like I'm kind of following in WEEZER's footsteps.

"So then, after that, I said, 'I've gotta get back to recording.' First of all, I quit my day job. And I said, 'I've gotta get back into writing songs again.' I mean, this is a tremendous pat on the back, as a songwriter, to get a cover [from a band like METALLICA]. It was that huge all over the world. I would get statements from, like, Brazil and Argentina and France and Germany. [I was], like, 'Wow. They're huge everywhere.'