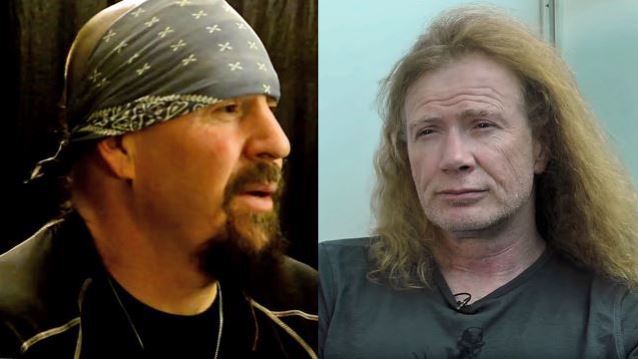 How MIKE MUIR And DAVE MUSTAINE Squashed Their Feud

Vocalist Mike Muir of Venice, California crossover thrash/hardcore punk legends SUICIDAL TENDENCIES was interviewed on a recent installment of the "Rise To Offend" podcast. You can now listen to the chat using the Spreaker widget below (starting at around 47-minute mark).

Asked about his short-lived feud with MEGADETH mainman Dave Mustaine in 1990 when the two bands toured together as part of the "Clash Of The Titans" package, Muir said: "This is before the Internet days. And, basically, there was an article, and someone that interviewed [Mustaine] said [to me], 'Hey, Mike, I just wanna make you aware of this…' And I'd seen Dave a few times, he was good friends with our old guitar player, and I never had a problem with him, and I was really surprised why he would say some of the things that they said he said. And I talked to the writer, and he assured me that it was all said. So I was disappointed, so I went back and I made some comments too. And on the tour, when it finally started, I went up to [Dave] and I discussed it with him and had a discussion, and he kind of said, 'That didn't really happen.' And he came back the next day and said, 'You know what, Mike. I like you. Maybe I did say those things. I don't remember if I did. I don't know why I would. And sorry.' And ever since, we've been great."

He added: "There's things sometimes that we do that we don't remember or wish we hadn't done. I think Dave is a really good guy. He tries to be a good person, as good as he can be, and anybody that does that I don't have a problem with."

Mustaine addressed his onetime war of words with Muir during a 2009 interview with Metal Insider. He said: "Muir wanted to fight me. I had to go up to him and say, 'Look, dude, if we're going to fight, let's fight after the tour like gentleman.' Fortunately for me, he respected that, because he was a big guy and he probably would have stamped me pretty good. I doubt that I would have lost. I don't know that anybody doesn't lose. When you get in a fight, there's never a winner. And the thing is I totally respect Mike, always have, but we had this difference; it was so bad. The problem was I said something and it was taken out of context by a journalist."

The Muir-Mustaine beef reportedly started because the SUICIDAL TENDENCIES frontman was upset that the MEGADETH leader apparently tried to throw his band off the bill, and he responded by attacking Mustaine's alcohol addictions and joking that Dave "lived at the Betty Ford clinic." The feud nearly became violent on the aforementioned "Clash Of The Titans" tour when Muir challenged Mustaine to an onstage fistfight. Muir claimed that "there are a lot of people who would like to see Dave get his butt kicked, and the Lord knows Mike Muir ain't goin' down. I'll fuck him up... I'd dazzle him, left 'n' right. I wanna see a little blood, y'know what I'm sayin'?" Mustaine responded to Muir verbally, claiming that Muir was stupid for trying to intimidate him, and claiming to be a SUICIDAL fan as well.