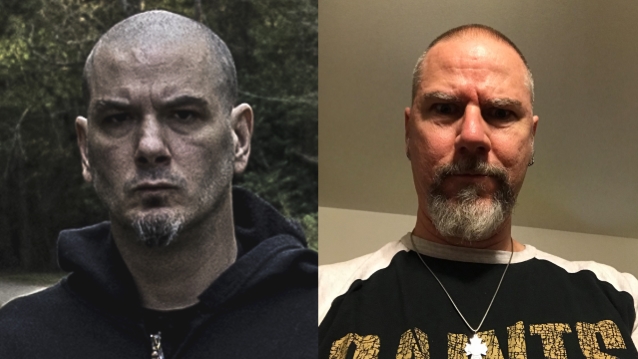 How PANTERA Was Influenced By EXHORDER

In a brand new interview with Poisoned Rock webzine, guitarist Marzi Montazeri of New Orleans-based thrash metal pioneers EXHORDER was asked to comment on his band's alleged influence on PANTERA's decision to move from a power metal act to a more aggressive form of thrash.

"Look, you're asking a question from someone that actually was a part of it," Marzi responded (see video below). "I actually remember the first [PANTERA] show with [singer] Phil [Anselmo] was in Shreveport. I saw that show, and they opened up with [a] VAN HALEN [cover] and they would do Ozzy [Osbourne]. They would do some covers and they would do originals. And then there was a time period where they kind of separated. Dimebag [guitarist Darrell Abbott] went and auditioned for MEGADETH, and he got the job — Dave Mustaine gave him the job — but Darrell said, 'If I go, my brother goes with me.' And Dave said, 'No. We have a drummer.' So Darrell said, 'No, thanks.' That's how dedicated he was to Vinnie [Paul Abbott, PANTERA drummer]. This is not made-up stories, by the way — this is the truth.

"And so, at this time, Philip went and joined EXHORDER for, I think, three days. But then Kyle [Thomas, EXHORDER singer] came back in the band, so they called [Phil] and said, 'Sorry.' And I think Philip really loved EXHORDER and he wanted to be in that band, and since he wasn't gonna be able to, he came back [to PANTERA] and had the EXHORDER demos and kind of said, 'We wanna sound like this,' kind of, sort of.

"That's a vague way to put it, but they adopted that groove kind of mentality," Marzi explained. "Because before that, they were glam rock, and I think they adopted that tone, the guitar tone, and his vocal style and the groove, and they simplified it.

"I've never seen a band work as hard as PANTERA," he continued. "'Cause I was there from the very, very beginning. I was friends with Darrell and Vinnie first, and then, later on, Philip and Rex [Brown, bass] and all that. But I have a lot of love and respect, to this day, for them. And, again, I really didn't see people work that hard. They worked harder than any band — definitely harder than EXHORDER; EXHORDER didn't do shit back then. They worked really hard, and they put themselves where they belong — at the very, very top.

"So, what do I think? I think shit happens. There's similarities," he added.

"I always use this as an example. [Eddie] Van Halen is my God — for me. And then Randy Rhoads is like the son of God. But Eddie is like God. And you really can't explain David Lee Roth. David Lee Roth is an embarrassment now, but when you listen to the VAN HALEN records… When I did, by the way, I didn't speak English, so I didn't even know what he was saying, but just the sound, the tone — everything was just magical. And then when you break that down, and the show, the live show that they had, [Roth] was ripping off Jim Dandy from BLACK OAK ARKANSAS. If you go to YouTube [and seach for] Jim Dandy from 1974 or something concert, you'll go, 'Wow, man. That's David Lee Roth.' David Lee Roth wrote him a letter — it's documented — and he sent it to him, and he said, 'Hey, man, I came to your show with an 8-millimeter camera and taped the whole show and I took the whole show for VAN HALEN' — kind of giving him thanks for it. So, he admitted it.

"You see what I'm saying? The similarities are there, and we don't know where they come from. But they're there. It's just what you do with it. So, PANTERA did great with it."

In the 1990s, Marzi hooked up with SUPERJOINT RITUAL, with Anselmo as lead vocalist, and appeared on the band's first two demos. By March of 2010, Marzi rejoined forces with Anselmo to work on what became Philip's first solo project since PANTERA, PHILIP H. ANSELMO & THE ILLEGALS. Marzi recorded THE ILLEGALS' debut album, "Walk Through Exits Only", and toured with the band before exiting the group in November 2015. Two years later, Marzi joined EXHORDER, which released its first album in 27 years, "Mourn The Southern Skies", in September 2019 via Nuclear Blast Records.

Thomas is now the sole remaining founding member of EXHORDER, which parted ways with original guitarist Vinnie LaBella in February.