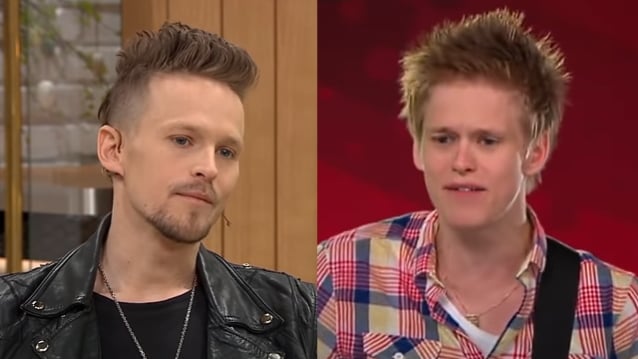 How SKID ROW's New Singer Went From Covering '18 And Life' On 'Swedish Idol' To Fronting The Band: 'It's Like A Hollywood Script'

New SKID ROW singer Erik Grönwall was a guest on Swedish TV channel TV4's "Nyhetsmorgon" program earlier today (Thursday, April 21). During the chat, Erik discussed how he went from auditioning for the competition show "Swedish Idol" back in 2009 by singing a cover of SKID ROW's "18 And Life" to now fronting the band. The 10-minute Swedish-language segment can be viewed below.

Erik talked about his longtime love for SKID ROW's music during an appearance on the latest episode of SiriusXM's "Trunk Nation L.A. Invasion", recorded just hours before the band's first performance with the Swedish singer on March 26 in Las Vegas as the opening act for the SCORPIONS. The 34-year-old musician said (as transcribed by BLABBERMOUTH.NET): "I grew up listening to SKID ROW, and I was working as a karaoke host before I wanted to become an artist. So I was working as a karaoke host — I did everything I could just to work with music. And I was singing '18 And Life' and 'Youth Gone Wild' during these karaoke nights. And [former SKID ROW singer] Sebastian's [Bach] voice was one of the reasons why I even started singing. And then I managed to get on 'Idol' — the 'Idol' show in Sweden — and on my audition, I sang '18 And Life'. And it kind of, like… It's so full circle here. So, that song became the song that gave me a career. And since then, I managed to become the frontman of H.E.A.T. I've been in that band for 12 years. And I've been working with John Legend and Alice Cooper; in New York, we did 'Jesus Chris Superstar' live in concert, which was aired on NBC. And that was in 2018. And then last year, I was diagnosed with leukemia. And this is why I started a YouTube channel. Because I was kind of moving away from being an artist; I wanted to try other things. And I started the YouTube channel because I promised myself when I was at the hospital — I got full perspective — and I was, like, 'If I make it out of here alive, I'm gonna sing for the rest of my life.' And I started the YouTube channel as a healing process; I just had to sing — I had to get music out there.' And then [in] January [of 2022], I think, [SKID ROW bassist] Rachel [Bolan] contacted me [about joining the band]. And it's been happening so fast. It's so surreal — everything. I'm still trying to process the whole timeline. [Laughs] It's like a Hollywood script."

Grönwall joined SKID ROW as the replacement for ZP Theart, who had been in the group for more than six years.

Last month, SKID ROW released its first single with Grönwall, "The Gang's All Here". The song is the title track of the band's upcoming album, which will arrive on October 14 via earMUSIC.

Bolan recently told Meltdown of Detroit's WRIF radio station about Grönwall's addition to SKID ROW: "Just the way he does things and his work ethic is one I've never seen other than the four of us that are already in the band. He just doesn't stop until he gets things absolutely right. Whether it's his version, what he thinks is right, or what we think is right, he works hard — he works hard. And you can see why he had the success he did overseas because he's a really, really hard-working singer that takes care of his instrument and that takes pride in his craft."

Bolan previously talked about how Erik came to join SKID ROW during the aforementioned appearance on "Trunk Nation L.A. Invasion". "We toured together. H.E.A.T. was on tour with SKID ROW. What year was that? '18? And we'd hear him every night from the dressing room," he said. "And a couple of times, I was, like, 'Man, listen to this guy sing. He's phenomenal.' And then, I forget who told me, someone that was with us, 'Yeah, he won 'Idol' in Sweden.' And I was, like, 'Man, he's got pipes.' And I was listening. Then I went behind the monitor board a couple of times. And in my head, I'm, like, 'Wow! When SKID ROW has some downtime, I'm gonna get in touch with this dude and start a side project with him.' And obviously, that never happened. But as time went on and we got to the point to where we were with ZP and stuff, Erik was our first… I told Snake, I go, 'We've gotta check this guy out.' And along with Snake and the rest of the guys, and Nick, our producer, Nick Raskulinecz, were, like, 'He's the guy, man. Send him some songs.' So we sent him some songs that we were recording, just with a guide vocal on it, and it came back about 24 hours later, and we were, like, 'All right. He's the guy. Get him on a plane. Let's do this.'"

Last September, Grönwall released his cover version of "18 And Life" via all streaming platforms. At the time, he said about his version of the track: "This song was basically the starting point of my professional career as an artist. I performed this song during my 'Swedish Idol' audition back in 2009. 12 years later it's time to give this bad boy a try again. Here's my version of the SKID ROW song '18 And Life'."