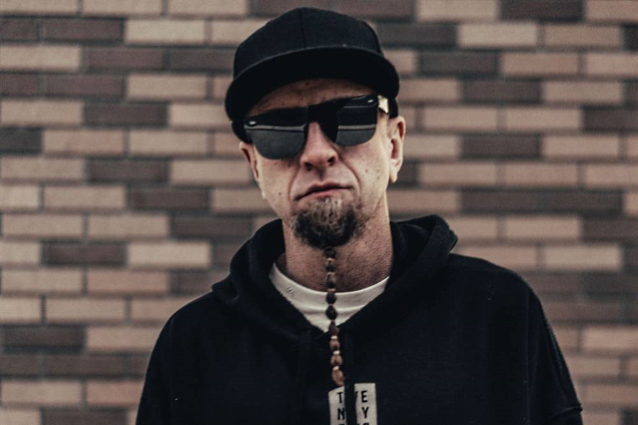 SYSTEM OF A DOWN bassist Shavo Odadjian spoke to the "RRBG Podcast"about being a cannabis advocate and founder of the cannabis lifestyle brand 22Red, which focuses on cannabis, fashion, music, and wellness. Speaking about how he first got involved in the cannabis industry, Shavo said (as transcribed by BLABBERMOUTH.NET): "I've been a smoker since I was about 20, 21 years old. I became a connoisseur on our first tour when I met Arjan Roskam, who's the owner of the Green House Seed Company in Amsterdam, who invented the White Widow and the Super Silver and the Super Lemon Haze and all that stuff. I met him accidentally, and we hit it off. And I tried all these strains. In L.A., you can try strains — whatever was available, you got to smoke. Here was a menu and shit. So I was, like, 'Let me have a little bit of everything.' And I took it to my room and I smoked it. Long story short, he invited me to that season's harvest tasting, and it was a table with bowls of weed. I think you can find that on YouTube. If you put in 'SYSTEM getting high' or something, it's in there — a small amount of it — 'cause they were filming at the time. And that just turned me into the connoisseur."

He continued: "I don't wanna get high-high; I just want a taste, and I wanna look at it and I wanna smell it. It all became a part of me. So throughout the years, I just kept smoking — not just to get high. Some people just smoke to get high and sit on the couch. Not me. I do stuff. I'm very go-getter and high energy, so I smoke and I do things. And everyone wanted me to have a strain when it got medically legal in L.A., Cali — everyone wanted me to have a strain, and I just didn't wanna get involved; it was not my thing. I should have — it would have gone crazy — but I didn't. I waited. And when I was introduced to one of my partners, who actually is one of the founding growers from Cali from back in '06 or '07 — or maybe '10. In '09 or 2010, he was one of the first people to grow OG back then, with, of course, the legends out there, like Kenji and all those other guys, and Wonderbrett. He's one of those guys.

"When I started to grow, I was, like, 'I can represent this,'" he explained. "I said, 'This is really cool.' And we were already doing a lifestyle brand. We didn't have the name 22 yet. And it kind of was, like, 'Let's just make it full-encompassing.' It was 2017, and Cali was gonna get legalized to recreational, which was a good time for me to get in and not worry about anything. I said, 'I can do this now and speak about it without having to have that weird stigma.' But who cares? I never was one to care about stigmas. But I met the right people at a good time in my life. I had clarity. I had to clean myself up of a lot of stuff that I had dabbled in a little while back. So I was this newfound person. And I've got my kids, I've got my wife. Everyone's settled. Let's go. A new thing on the horizon. And that's what it was. And we built it. We started in Cali. Three guys. No investment — just us putting some money in, doing what we can. Now we're in three states. We have a full company. We have a CEO, we have a COO. It's going, bro. We're hoping to scale to three more states within 2021, 2022 — three to five more states that we're looking at at the moment, and see where it takes us. And we have high-quality apparel that I helped design. 'Cause if it was gonna be a nice brand thing, I don't want it to be like band merch, where it's just like get any shirt, any fit, throw your name on it and sell it. I'm checking out every shirt. Very minimal branding. The 22 shirts are blank with 2s on the back or something on the sleeve. I have writings inside. It's for stoners, so when you look inside, you're, like, 'Oh, shit. It said something to me.' The quality has to be the best on the cannabis. I do the quality control myself. I send my grower to other states to make sure that they're growing the way we do here in Cali. We're trying to do it right, man — stay consistent. Not one person has ever complained about the quality of our cannabis or our clothing — ever. So, that's good."

According to its web site, 22Red's mission is "to create an amplified cannabis lifestyle that celebrates the creatives of the world" across cannabis, music, art and fashion.