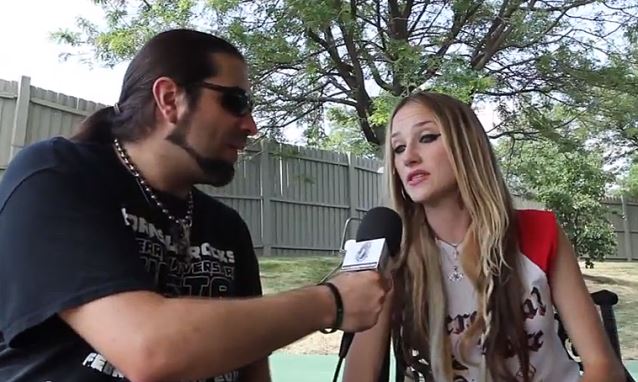 Jo Schüftan of Horns Up Rocks! conducted an interview with singer Jill Janus of the Los Angeles-based, occult-themed traditional heavy metal band HUNTRESS during the recently completed Rockstar Energy Drink Mayhem Festival. You can now watch the chat below.

Director Phil Mucci, who helmed the "Zenith" clip, spoke about working with Jill Janus: "Jill doesn't compromise; she wanted something her fans would cherish for years to come. In a disposable world, she's very conscious of her legacy, as am I. It's more than a music video to us. It's a gateway drug."

Jill cannot wait for the fans to see "Zenith". "You better pack your bongs now, 'cuz this is going to trip you the fuck out!" she says.

"HUNTRESS is ecstatic about our new music video for 'Zenith'.

"Director Phil Mucci is a visionary who brought our galactic hallucinations to life.

"HUNTRESS dedicates 'Zenith' to our fans who've inspired us on this path, and who continue to travel with us on our cosmic musical journey. Together we will smoke the galaxies and blaze a new future for true heavy metal!"