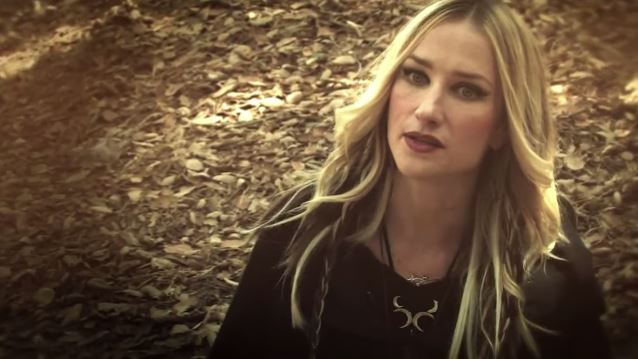 Singer Jill Janus of the Los Angeles-based, occult-themed traditional heavy metal band HUNTRESS has revealed to Revolver magazine that she was recently diagnosed with uterine cancer. She said: "During the process of writing and recording our third album, I began to feel like something bad was growing within me. When we were on tour with AMON AMARTH, I started to bleed heavily between my periods. I had a procedure, and my doctor found early stages of cancer in my uterus. I will have a hysterectomy in June. I know I'll survive. I've survived much worse."

Janus also spoke about her lifelong battle with mental illness. She said: "I was diagnosed with bipolar disorder first, when I was 20. I started to show signs of it when I was 13, though, and I struggled with it through high school. But it started to get dangerous in my early teens. By the time I was 20 and living in Manhattan, it was very, very difficult for me. That's when I was admitted into a mental health facility and was diagnosed bipolar with schizoaffective disorder, which progressed into schizophrenia and dissociative identity disorder."

She added: "I was suicidal constantly. I was very suicidal early on in my life. Then in my mid-20s, it shifted to full-blown mania, where I can't really remember much of my 20s. I can't remember anybody from high school, either. I lost my long-term memory and can't remember names, faces, or even places. We'll be at a venue on tour and Blake [Meahl, HUNTRESS guitarist] will be like, 'We've played here two times before,' but I'll have no recollection."

HUNTRESS's third studio album, titled "Static", will be released on September 25 via Napalm Records. The CD was produced by Paul Fig (Grammy-nominated engineer who has previously worked with ALICE IN CHAINS, DEFTONES, TRIVIUM, GHOST) and Jim Rota (FIREBALL MINISTRY, executive producer for "Sonic Highways" series and producer of "Sound City" movie), and was engineered and mixed by Fig.

A snippet of a new HUNTRESS song, "Flesh", can be streamed using the SoundCloud widget below.