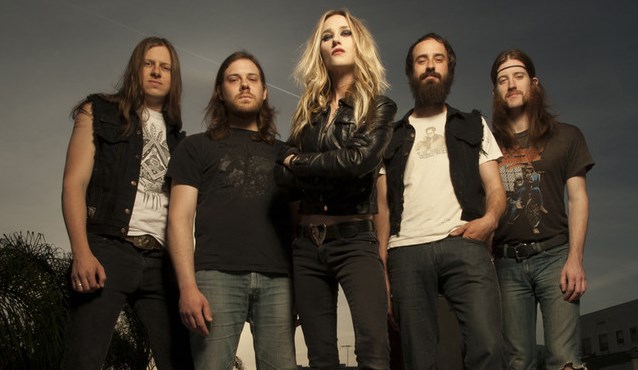 Los Angeles-based, occult-themed traditional heavy metal band HUNTRESS will enter the studio later this summer with the production duo of Andrew Alekel (FOO FIGHTERS, NO DOUBT, QUEENS OF THE STONE AGE, CLUTCH) and James A. Rota ("Sound City" movie, FIREBALL MINISTRY) to record its third album for an early 2015 release via Napalm Records.

HUNTRESS' sophomore album, "Starbound Beast", was released on June 28, 2013 in Europe and on July 2, 2013 in North America via Napalm Records. The CD was recorded at Hobby Shop Studios in Los Angeles with producer Chris "Zeuss" Harris (SHADOWS FALL, HATEBREED, MUNICIPAL WASTE). The cover artwork for the effort was once again created by Vance Kelly (THE SWORD, GRAVEYARD, HIGH ON FIRE, PENTAGRAM, ALICE IN CHAINS, AVENGED SEVENFOLD, DEATH ANGEL), who previously worked on the group's debut album, 2012's "Spell Eater".

"Starbound Beast" included the track "I Want to Fuck You to Death", which was co-written for HUNTRESS singer Jill Janus by legendary MOTÖRHEAD frontman Lemmy Kilmister.

In an interview with Examiner.com, Janus stated about HUNTRESS' musical evolution from "Spell Eater" to "Starbound Beast": "When we recorded 'Spell Eater' in 2012, we were still such a new band, we were still developing our sound and we were still trying things out. And we put it out with a fury and we love that record. This time around with 'Starbound Beast', we were a little more thoughtful with it, my lyrical content is a little bit more advanced, as well as an overall new confidence in the band. The musicianship is better, the songwriting is better, and it's the evolution of HUNTRESS. That's what's going on here, it's naturally evolving and that's really cool to see."