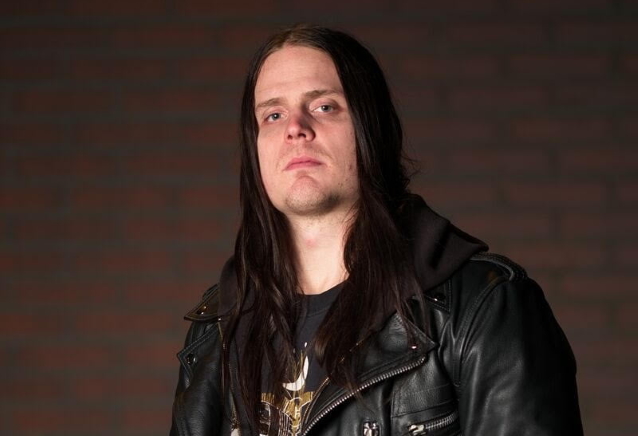 HYPOCRISY has announced the addition of "session" drummer Henrik Axelsson to the group's ranks.

Earlier today (Tuesday, April 12),HYPOCRISY released the following statement via social media: "Please welcome Henrik Axelsson! This talented Swedish musician played in IMPLODE and SOILS OF FATE. Since 2014, he is the drummer for THE CROWN. Now Henrik is going to join HYPOCRISY as a session member. Looking forward to performing together".

Longtime HYPOCRISY drummer Reidar "Horgh" Horghagen left the band earlier in the month. At the time, the band said about the split: "It's not easy for us. We've played together for 18 crazy years filled with music, tours and friendship. So many countries, so many songs, and so many gigs with Horgh on stage with us. It's the end of a long interesting chapter, and the beginning of a new one. We are grateful to Horgh, this great musician and great man, for all we have achieved together."

Horgh said in a statement: "I want to take this opportunity to thank the fans for the great support over the years, and I'm grateful to have had the opportunity to meet so many of you as we toured around the world. Thanks to the band and crew for the time we spent together. I wish you all the best for the future."

A member of the Norwegian black metal band IMMORTAL since 1996, Horgh joined HYPOCRISY in January 2004 as the replacement for Lars Szöke.

HYPOCRISY will embark on the "Worship" tour this spring. The 28-date trek will kick off at Warsaw in Brooklyn, New York on April 29 and will make stops in Toronto, Los Angeles, and Austin before concluding in Baltimore at the Maryland Deathfest on May 29. Support on the trek will come from CARACH ANGREN, THE AGONIST and HIDEOUS DIVINITY.

HYPOCRISY's latest album, "Worship", was released last November via Nuclear Blast Records. The 11-track effort was recorded and mixed at frontman Peter Tägtgren's Abyss Studio AB in Sweden while mastering was completed by Svante Forsbäck at Chartmakers Audio Mastering. Designed by artist Blake Armstrong (KATAKLYSM, IN FLAMES, CARNIFEX),"Worship"'s artwork speaks to the history of the relationship between humanity and extraterrestrials.

Please welcome Henrik Axelsson! This talented Swedish musician played in Implode and Soils Of Fate. Since 2014, he is...