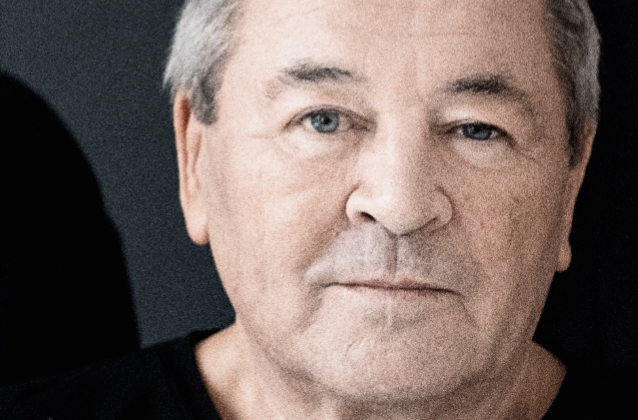 Ian Gillan spoke to SiriusXM about "Born Again", his first and only studio collaboration with BLACK SABBATH, which was recorded at Richard Branson's Manor Studios in Oxfordshire and then released in August 1983.

One of SABBATH's most poorly reviewed efforts, "Born Again" began with a bender at the Bear Inn, one of the oldest pubs in Oxford, England.

"How it started is was just 'cause we got drunk together one night," the DEEP PURPLE frontman said. "I went for a drink with Tony [Iommi] and Geezer [Butler], and we ended up under the table. And I can't remember much more that happened. But I got a call from my manager the next day saying, 'Don't you think you should call me if you're gonna make decisions like this?' I said, 'What are you talking about?' He said, 'Well, apparently you… I just got a call. You agreed to join SABBATH.' So that's how it happened. I was at a kind of loose end anyway, having just finished with my own band and PURPLE not really being anything viable at the time. So we set a one-year plan, and it was to do an album and a tour. Nobody knew what was gonna happen, so we pitched up and I pitched my tent, literally, at the old manor in Oxfordshire. And we made an album. I didn't see much of 'em. They were night people, so they slept all day and worked all night. I got up in the morning, cooked my breakfast, went to the studio to hear what they had recorded the night before and write a song over it. And that's how the album was made."

Gillan went on to describe the making of "Born Again" as "a challenge for me. It was a bit like doing [Andrew Lloyd Webber's rock opera] 'Jesus Christ Superstar' or singing with [opera singer Luciano] Pavarotti; it's just something completely different," he explained. "But Tony is such a great writer. You know what to expect with Tony. There's no multidirectional approach. He is the father of everything that came out of Seattle, I believe. He's just very direct, and that's how he evolved from the early days.

"I found it very easy to sing and write songs with [Tony]," Ian continued. "And we had a couple of good ones. There was always a narrative. My favorite song from that album is 'Trashed', which was a true story about a racetrack and too much drink and spinning a car and crashing it and going upside down. It was exciting times."

The second track on "Born Again" was a brief instrumental called "Stonehenge", and on SABBATH's 1983 tour, the band hilariously had to shelve a Stonehenge stage concept because the scenery was much too big to use.

"We had a production company called Light And Sound Design; they were in Birmingham, where the band was based," Gillan recalled. "And after rehearsal one day, we had a kind of meeting to go the office, and as we were walking through these corridors, one of the guys said, 'By the way, anyone got any idea of a concept for a stage set or anything?' And Geezer Butler said, 'Yeah. Stonehenge.' And the guy said, 'Wow! That's great.' He said, 'How do you visualize it?' And Geezer said, 'Well, lifesize, of course.' We didn't quite go lifesize, but it was about two-thirds. And we could never get it all up on a stage. We played some huge arenas, and places, stadiums, and you couldn't get it [up there]. So there are parts of it, there are monoliths that are all lying around in docklands somewhere and are spotted around the world, as far as I know."

In addition to being the only BLACK SABBATH album to feature Gillan, "Born Again" was also the last of the band's studio albums to feature drummer Bill Ward.

A longtime treasure among hardcore SABBATH fans, "Born Again" was re-released in the spring of 2011 as a special two-CD set featuring a 1983 live performance from the Reading Festival.

At the time of its initial release, "Born Again" was a commercial success. It was the highest-charting BLACK SABBATH album in the United Kingdom since "Sabbath Bloody Sabbath" and became an American Top 40 hit. Despite this, it became the first BLACK SABBATH album to not have any RIAA certification (gold or platinum) in the U.S.