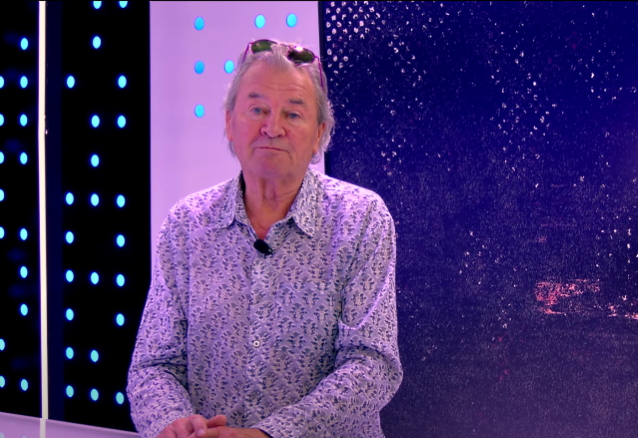 Ian Gillan says that a DEEP PURPLE reunion with Ritchie Blackmore would be "utterly disrespectful" to the current lineup of the band.

Blackmore is a co-founder of DEEP PURPLE and wrote many of their most memorable guitar riffs, including "Smoke On The Water", but he has not played with the group since his 1993 exit. Steve Morse effectively took over Blackmore's slot in 1994 and was in the group for 28 years — longer than Ritchie — before being officially replaced by Simon McBride in July.

Gillan addressed the possibility of a Blackmore return in a new interview with Spain's RockFM. The 77-year-old singer said (as transcribed by BLABBERMOUTH.NET): "Look, DEEP PURPLE is a family that's been together before I joined. In '68, it was Ritchie Blackmore, Jon Lord, Ian Paice, Nick Simper and Rod Evans. Roger Glover and I joined in '69. And in the intervening periods, there's been David Coverdale and Glenn Hughes and a couple of other guys. And then, when we grew up, when we settled down and the human chemistry was okay, we were getting on fine. We had the reunion with 'Perfect Strangers', but everything was slightly different. Ritchie was different, and I think we all were. Ritchie used to be my roommate in DEEP PURPLE; we used to party together. And I don't like to think of the negatives. I just have lots of fantastic memories of Ritchie as a great guitar player [with] a wicked sense of humor — and I mean wicked — and a professional, a real good guy, in that sense. But something changed in Ritchie when we got back together, and we'd all changed, and the human chemistry wasn't quite the same. So it became difficult. And in the end, there was this antagonism. And I got fired from the band because I wanted to do more touring, and Ritchie wanted to do less touring. And we had a meeting one day, and I said, 'Why don't we go to South America? Why don't we go to Russia? Why don't we go all over the world? We're a live band.' And the next day Ritchie went to the management and said, 'Well, it's him or me.' So they chose him. And that was fine. And then they made a record with — another singer; I can't remember his name. And the record label said, 'Either you get Ian back in the band or we're tearing up the contract.' So I went back in DEEP PURPLE, and Ritchie went crazy. He didn't like it. So eventually he walked out. So, in normal terms, in a family or something like that, because we are a family, you'd think it was like a divorce — something like that. He walked out; he's gone. But he wanted to keep control of the band after having walked out. And he's been a pain in the ass ever since. [Laughs] But we are getting on much better these days. I think his manager has got a lot to do with it, the problem that exists. So it's one of those things that you cope with."

Ian added: "I think the idea of a call for a grand reunion or something like that, it would be utterly disrespectful to the living, breathing DEEP PURPLE. It would be awful. The atmosphere would be terrible. It would be artificial. It would be only for money — nothing else. Because there's no love there. There's no affinity.

"Twenty-five percent of the essence of DEEP PURPLE is improvisation, and we've got a musician now that is absolutely unbelievable. And I don't know how much Ritchie has been practicing or anything like that.

"I could go on for a long time, but the simple answer is no. It's the ex-wife. We do not want to get back together again."

Gillan previously spoke about his longstanding feud with Blackmore in a September 2021 interview with Vikram Chandrasekar of Tales From The Road. Asked if he is still in contact with Ritchie and whether there is any chance at all of the guitarist ever sharing the stage with DEEP PURPLE again, Ian said: "No. The answer to your question is yes, we are in touch. Tensions eased quite a lot after we got hold of our business affairs and sorted everything out. There were previous managers from the past who had not done things exactly as you would like. I didn't get paid for 10 years when I was with DEEP PURPLE — in the big years — and goodness knows what happened to all that. And there were other tensions too. And needless to say, it was all pretty nasty when we finished and Ritchie walked out. But we're too old for that now. We've both written some pleasant notes via our managers. I can't write to Ritchie or phone him because he doesn't have a telephone, he doesn't have a computer. He lives in a world of greensleeves — he lives in a medieval world, and he has messages given to him and that sort of thing. But he's sent some pleasant words to me, and I've sent some pleasant words to him. There are still issues; there are still bones of contention. I've seen a lot of rubbish being spoken — it's not worth even rising to the occasion — but I hear [former DEEP PURPLE singer] David Coverdale and others talking about what happened at the Rock And Roll Of Fame. Well, we were very kind to everybody, the current band. And we did invite Ritchie to play 'Smoke On The Water' with us at the ceremony, but he declined. So, [those] are just opportunistic remarks from the others.

"We've never had any antagonism towards Ritchie," Ian clarified. "He has his own interpretations, and the rest of us have our interpretations, so it's really not worth being fired up about it. But I think probably this late in our career, and with things moving along so pleasantly for the band, it would naturally enough — we discussed this years and years ago when it was first talked about — it would be a circus and it would be a distraction to everything we're doing, to be honest. It would be no fun at all, because we don't work that way anymore."

Blackmore previously suggested that PURPLE's manager had blocked him from joining his former bandmates onstage during the 2016 Rock And Roll Hall Of Fame induction ceremony, and he used that as an excuse for not attending the event.

In late 2020, Coverdale expressed his exasperation at DEEP PURPLE for how he and Glenn Hughes were treated by their former band ahead of their Rock And Roll Hall Of Fame induction. The singer, who played with DEEP PURPLE along with Hughes from 1973 to 1976, said: "Once it had been announced that we were officially being inducted into it, the current DEEP PURPLE refused to go if Ritchie Blackmore was going to be there. And this was, like, 72 hours before, when I was ready to fly with my family. And this cost me, like, $75,000 [or] $85,000, because you have to pay for all the tables apart from the one you're on, and I had my daughter fly in from Germany, my son came out of college. It was a family affair."

He continued: "Suddenly, Glenn Hughes and I were told, 'Well, we don't want you singing with us.' Initially, I'd spoken to Ian [Gillan] about coming up and singing the backgrounds of 'Smoke On The Water', because originally they were going to close the show. So, that suddenly was pulled, the plug. They tried to stop us doing speeches, and my wife was fucking furious, apart from the fact she spent a fortune on posh dresses. [Laughs] And I said, 'Fuck it! Nobody's going to keep us off.' I got in touch with Carole, Ritchie's manager, and I said, 'Tell him to come with me. Nobody's going to fucking touch him. Tell him to come with me,' and he didn't want to do it."

Coverdale added: "The first thing I said when I was up there, was, 'None of us would have been standing here without Ritchie Blackmore,' and I made sure of that point. Steve Morse and Don Airey [current DEEP PURPLE keyboardist] were more complimentary to Glenn and I than the other guys. We had a blast; we had a fucking great time. I'm very happy that I am who I am, and I just talked to Glenn the other day about it: 'What the fuck was up their ass?!'"