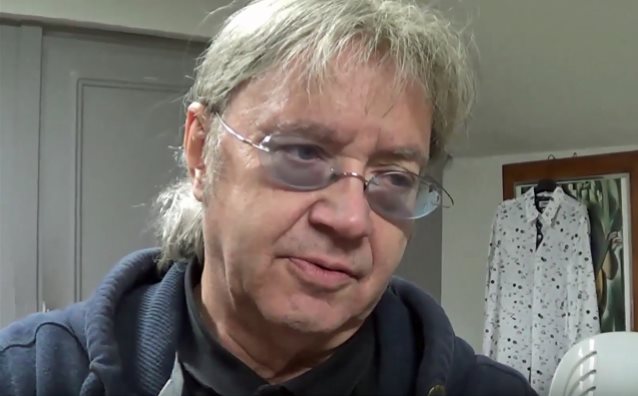 British rock legends DEEP PURPLE will release their new album, "InFinite", the highly anticipated follow-up to their worldwide chart-topping effort "Now What?!", on April 7 via earMUSIC. The first single, "Time For Bedlam", was recently made available via a lyric video, which can be seen below.

Speaking to Heavyworlds last month, Paice stated about "InFinite" (see video below): "The album was recorded in Nashville at the same studio as 'Now What?!', with the same producer, Bob Ezrin. We're very happy with it."

"It'll be a long tour," Paice told Heavyworlds. "It may be the last big tour; we don't know. But it will be a long tour and we will try and get lots of the new record on the stage without losing some of the old songs."

He continued: "We haven't made any hard, fast plans [about whether we will do any long touring after 'Long Goodbye']. But it becomes obvious that you cannot tour the same way you did when you were 21. It becomes more and more difficult. People have other things in their lives, which take time. But never say never."

Paice added: "We enjoy playing onstage, but we have to be real about life, you know? So this will be a major world tour, and when it's finished, we'll see how it feels."

"Time For Bedlam" is available as instant grat as part of the digital album pre-order, as well as on all streaming platforms.

A limited-edition EP for "Time For Bedlam", with non-album songs and unreleased recordings, will hit the shops on February 3.

A documentary movie, witnessing the songwriting process and the recording of the album with Ezrin, has been produced, allowing for the first time for the fans to be part of the private band member interactions in the studio. The movie will be included in some editions of the album and it will be presented before release in various fan events worldwide.

DEEP PURPLE singer Ian Gillan stated about the "InFinite" album title: "If you take it literally, you may, quite reasonably, think the 'Finite' part of the word describes the life of DEEP PURPLE, with a clear beginning and a nebulous end; but what of the 'in' bit? The word 'infinite' is a three-dimensional, double-edged sword. It describes something that goes on forever in all directions; not unlike its temporal equivalent 'Eternal'. What's that all about?

"Stephen Hawking declared (in 'A Brief History Of Time') that, before the Big Bang there was nothing. That would put the kybosh on the idea of our universe being Infinite, as he provides a starting point, which is not acceptable to the concept. So, Hawking's universe in 'Finite'; by definition; whether he agrees or not.

"Ironically, he is quite wrong (scientists always are eventually),therefore the Universe is infinite, which means it will never end, and also means that it never started, and the corollary to that of course is that we don't exist.

"There is a metaphysical solution to all this, but it will have to wait until the tour is over because (thanks heavens) there are only 24 hours in a day (for the time being) or 10 hours in a metric day. More on that later…"

Paice suffered a minor stroke last year, forcing him to miss the band's shows in Sweden and Denmark — the first time his medical condition prevented him from performing with the group.