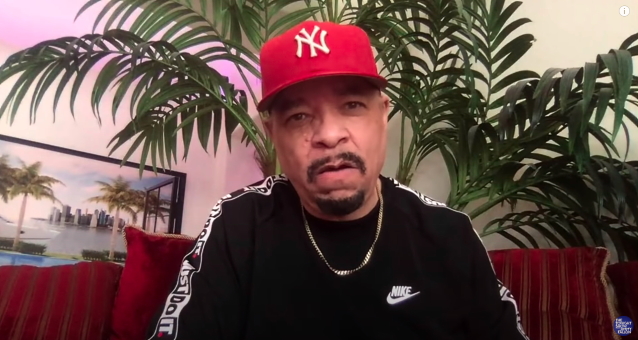 During an appearance on last night's (Wednesday, July 29) episode of "The Tonight Show Starring Jimmy Fallon", hip-hop legend, actor and director Ice-T spoke about the decision to re-release BODY COUNT's 2017 single "No Lives Matter" to radio.

He told host Jimmy Fallon (see video below): "If people have followed me, my whole career, it's always been anti-racism, trying to explain you the complications of living in and growing up in the hood, in the community — just me kind of walking you through someone else's life, so you can see it from their perspective. 'Cause I believe most of this stuff is perspective — it's easy to hate something that you don't truly understand how they see it.

"I did the song 'No Lives Matter', and in 'No Lives Matter' I break down the fact that even though racism is a problem, I believe it's a lot more to do with class too at the same time," he explained. "Let's say 'Law & Order'," referring to the long-running cop drama "Law & Order: Special Victims Unit" on which Ice-T has been a star for 20 years, "we'll say something like, 'They're from the Upper East Side, so tread lightly.' What we're really saying is they have money and they can fight us. So if you go in the hood, treat 'em any kind of way because they can't fight back.

"If somebody pulls you over, Jimmy, they know who you are, they know you could cause issues and problems. They're gonna treat you a little different than somebody who doesn't have a dime and they know that there'll be no repercussions.

"So in the song 'No Lives Matter', I say it doesn't matter what color you are — black, brown, red, poor whites that they call 'trash' — when it comes to the poor, nobody's important; no lives matter.

"So we thought we would put it back out, because people wanted something that was dealing with the times. And it's a very important song."

This past May, Ice-T expressed his support for those protesting police brutality and racial inequality following the death of George Floyd. In a series of tweets, the rapper shared videos of protests around the country and praised people for standing up for what they believe.

In one tweet, Ice-T shared the video for BODY COUNT's "No Lives Matter", and wrote in a caption: "ATTENTION If you have NEVER listened to any of my music. I think you should try and listen to the WORDS of this song.. Especially TODAY".