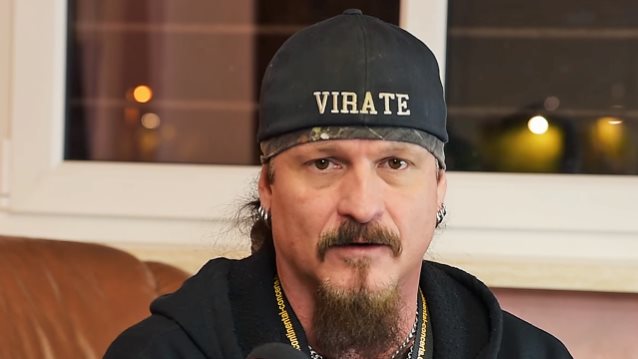 Matt Coe of Dead Rhetoric recently conducted an interview with ICED EARTH mainman Jon Schaffer. A few excerpts from the interview follow below.

Dead Rhetoric: How is your health these days following your second surgery in the fall of 2014 for a cervical fusion? How much did this slow down the process of development and recording the new album ["Incorruptible"]?

Jon: "Well, it did slow things down a little bit, but I think in a good way. It forced us to take a much-needed break. The band was prior to that, in the three years before that we did 350 shows worldwide, released two new studio albums and a live DVD, all in a three-year period so that was pretty serious and an intense schedule. I think in that regard the band was sort of burnt out in a way, by the time we got towards that final leg of the 'Plagues Of Babylon' world tour. We needed a break, but it's obviously not the way you want to be taking a break. It was a restful period, I had the surgery, another disc taken out and fusion done. That took a little bit longer to recover from this time, but I ended up still taking a break away from writing and recording, bought a building that ended up becoming our headquarters to build a studio [in Indiana] and everything. All of that work from the time I bought the property until finishing the construction was a year, and then it was time to get started on the music. I think everything turned out exactly the way it was supposed to. It was longer than we wanted, but at the end of the day you need to let the music flow naturally to get the most out of it and I think we have a very strong record because of this."

Dead Rhetoric: This is your final album for Century Media, and you've built your own recording studio and headquarters for the band to conduct activities in a much more cost-effective manner. What does this level of freedom mean to you? What are you most looking forward to that maybe couldn't happen as easily under the old business model?

Jon: "Ownership of rights, and having the masters to be in complete control for the long term. That's a big thing. There are so many different possibilities right now, for a veteran, proven band like ICED EARTH that is a solid brand. Those people around the world that we could possibly get into business with, the world is our oyster, really. We don't have to go with anything that resembles the old model, and I'm not even in a hurry to get into discussions about it because the thing is I can start my own label and make it exclusively for ICED EARTH, which is probably what is going to happen, and then license and do artist-services-type deals with different countries around the world. There are a lot of options. Of course, people are already talking to us and they are interested in us. I don't even know what this industry is going to look like a year from now. We have a good year's work ahead of us; there's no point in concerning ourselves with this aspect at the moment. We will do a lot of strategizing and options, and then whittle things down. We are open to a lot of ideas. Maybe we will end up doing a deal with one partner that's global, but I doubt it. I think it's going to be taken by regions, and we will probably keep the rights for ourselves in the United States and do a fulfillment type of deal. It's a really good position to be in, the biggest thing is in a market that's collapsing, which the old model is, there's always going to be a way to move forward. We are seeing some really cool developments with people, especially young people in the states with vinyl. That's a physical product and that's great for the bands — physical product means that we can profit more from it. We also want to maximize our profits so that the band can exist through all of this unknown certainty. There is no certainty in the way of selling music in this business is going. The more independent the better, the more direct relationship that you have with your fanbase instead of the parasites in the business, the better. We are going to be looking for partners, there isn't going to be any more slavery, those days are over."

Dead Rhetoric: If you had the opportunity to teach a freshman class in high school or at a freshman level of college, what subject matter would you consider teaching and why?

Jon: "[Laughs] That's an interesting question, man. You've got some cool kinds of questions. Most of the time it's the same kind of [things] over and over. I like this. I think I would probably have to really get them prepared for the world. I feel like the culture has gotten so soft, so wimpy. These kids are growing up in like a bubble, where they have no clue what they are getting ready to get into. This whole safe-space zone and maddening political correctness, it's killing our species. It's creating people that are so weak they aren't going to be able to make it in the real world. The real world can be pretty crazy. That doesn't mean you have to be mean and hateful, but you have to have some kind of thick skin to be able to deal with what's going to be thrown your way. It's just reality. It's not easy to be successful in the world. Maybe they'll appreciate it, maybe they won't, but to really get somewhere in this world you have to have drive and ambition, you have to be able to handle failure. You are going to hit roadblocks, and you are going to have a really hard time. Quitting with your tail between your legs and moving back in with your parents might not always be an option. I would try to inspire the kids, inspire them to be warriors. Prepare for things to come your way, but don't pretend that everything is in a perfect world out there."