ICED EARTH's JON SCHAFFER Is Still Being Held At Indiana Jail, Will Soon Be Extradited To Washington, D.C.

According to The Republic reporter Jordan Morey, Jon Schaffer is still being held at Marion County Jail as of Friday morning (January 29),a week after U.S. Magistrate for the Southern District of Indiana judge Mark Dinsmoresigned an order for the ICED EARTH guitarist to appear in D.C.'s district court.

Schaffer waived his preliminary hearing as well as his rights to an identity hearing and production of a warrant last week in the U.S. District Court for the Southern District of Indiana, court documents state. He will soon be transported by a United States marshal to Washington, D.C. where government lawyers and Schaffer's legal team have mutually agreed to handle all proceedings.

Last week, government lawyers asked the judge to not offer Schaffer a bond when he goes in front of U.S. magistrate.

More than 150 criminal cases have been filed so far. Charges include unauthorized access, theft, damage to government property and assault on law enforcement officers.

Earlier in the month, German daily newspaper Die Welt uploaded a video interview it conducted with Schaffer last November at a Washington, D.C. demonstration supporting Trump and protesting the 2020 presidential election results. In the chat, the guitarist said that "a group of thugs and criminals hijacked this country a long time ago" and warned that "they're messing with the wrong people here. Because now we see you, and you're going down. Mark my words."

As of this morning, Jon Schaffer was still being held at the Marion County Jail, sources said. https://t.co/l86KEWXCyw 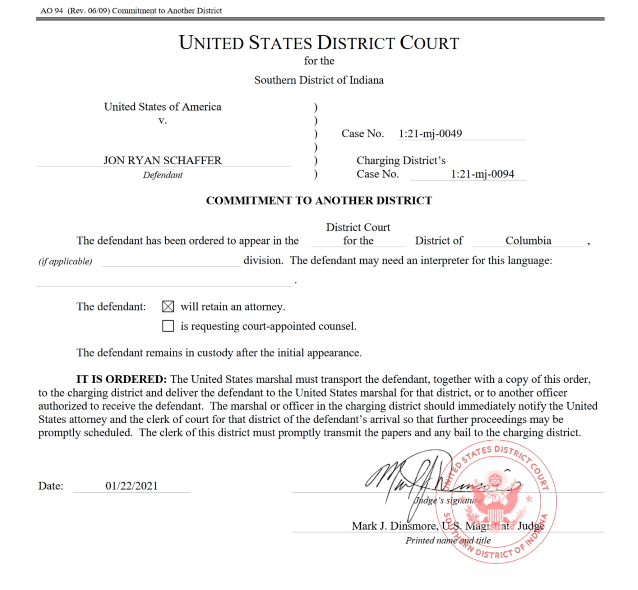