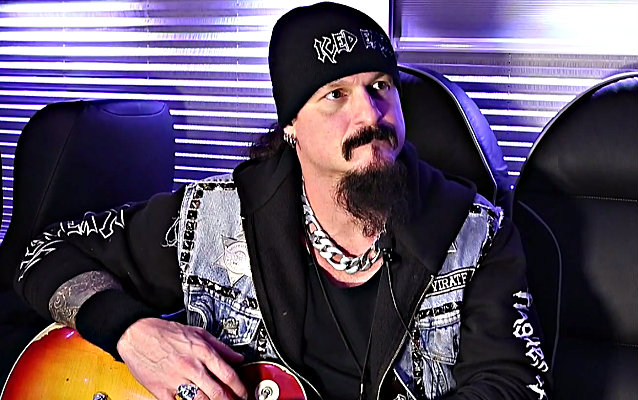 ICED EARTH's JON SCHAFFER: 'I've Always Been The Leader Of This Band And Always Will Be'

Metal Covenant recently conducted an interview with ICED EARTH guitarist/mainman Jon Schaffer. A couple of excerpts from the chat follow below.

Metal Covenant: In my point of view, the new ICED EARTH album, "Plagues Of Babylon", has definite resemblances to your latest album, "Dystopia". Was this like a conscious choice from your side or did you just write an album in the ICED EARTH vein?

Jon: Well, it's just an album in the ICED EARTH vein. I mean, the same approach was taken that we did to "Dystopia", so it's just another chapter. You know, it's what happens naturally; every record is. If you start doing something that's too contrived, then it becomes something that's not natural. Whether people get it or not, you know that's another issue, but we have to do what we're feeling at the time.

Metal Covenant: The first half of the album is a concept story. What happened then, did you run out of fuel or inspiration?

Jon: No, I just decided very early on that there's no reason to devote the entire album to this chapter of the "Something Wicked" story. I felt like we can tell it for five or six songs and we already had things like "Peacemaker" that wouldn't fit at all in the story, and I already had the music for "Cthulhu". It was different, you know. Different things were happening, and the decision to do "Spirit Of The Times" from SONS OF LIBERTY and to finally be able to do "Highwayman" with my brother singing on it, you know, that was like a big deal, so it didn't make sense to have a full concept album where "Highwayman" wouldn't have fit. It's very different, you know. It's kind of like an old RUSH record; that was the idea. Lke, "2112" was a concept on one side and on the other, it's individual tracks. Early on, that was decided.

Metal Covenant: Do you ever reflect on what's published about your new albums — you know, reviews and stuff?

Jon: I've seen some, but I don't really care. I really care more about what the fans say and I meet them and talk to them. What journalists say, I don't care. It really doesn't make any difference to me whatsoever, because it's like a lot of journalists, especially the guys that have been doing this a long time, they're so jaded and they hear so many new records. In the end, a lot of them don't even have a fresh, legitimate opinion as far as I'm concerned, so they don't really count, you know what I mean?! At the end of the day, it's the people who buy the music, who consume the music, who are the ones who pay the bills for me. Those are the fans, the people I care about. And as I said, you can tell from Facebook comments and from a lot of whatever's been put out on YouTube and stuff, the fan base is really happy. But journalists, why worry? I mean, it's really a waste of time.

Metal Covenant: ICED EARTH is like your band, it's your kind of solo project and has been for a long time. What's the best about being in a situation where you can make all the calls?

Jon: I don't really look at it that way. It's not a solo project, SONS OF LIBERTY is a solo project, you know. But I've always been the leader of this band and always will be. I mean, it's my vision and it has been since the mid-'80's. It's the thing I've been chasing all along. It's a battle, especially in the early days. The contractual conditions we were under were brutal and I don't think most people would have survived through that. All the changes and all the slavery like conditions made for difficult situations. It was not only the name ICED EARTH [that was being] controlled, but me individually, so I couldn't just break up ICED EARTH and start another band. It was either finish it or "it's over". You know, one of those kinds of things. I realized, basically nobody was gonna stop me.

Metal Covenant: Sometimes I admire you guys, you know, for being on the road and being away from home for such long times. Where do you actually find the energy to be away from home, and all these sacrifices, and through all the hard times?

Jon: It's in your blood, it's what you do. For me, it's not really a… I mean, I hate being away from my daughter, obviously. But you know, there's a lot of guys that do this that have families and I call it the "curse," man. You have the curse and you have that drive and you have that music that's brewing inside of you and if you wanna be a songwriter in a heavy metal band, you have to do this. It's not like country music, where you can sell your songs and being just a songwriter. Heavy metal guys wanna make their own music, so it's a different kind of a thing and it's a way of life.