ICED EARTH guitarist Jon Schaffer has pleaded guilty for his role in the January 6 riot at the U.S. Capitol. As part of the plea deal, he has entered into a cooperation agreement with the government.

During today's hearing, a federal judge asked Schaffer if he understood he was "giving up" his "right to be presumed innocent," according to WUSA9. Schaffer said he understood and agreed.

The government said it was agreeing not to oppose Schaffer's release during the sentencing phase.

Schaffer's attorney, Marc Victor, has asked the judge for his client to be released with no travel restrictions, saying that while he lives in Indiana, he has family he cares for in Florida and his legal team is in Arizona. He also noted that Schaffer is an "internationally known musician and recording artist."

"He is the first person to plead guilty in this historic investigation to take responsibility for his role in the Capitol riot," Victor said. "He contacted authorities as soon as he discovered he was a person of interest, and he self surrendered."

After pleading guilty, Schaffer will be released on the following conditions:

* Schaffer must submit to court supervision in the Northem Dlstrict of Indiana.

* Schaffer will surrender his passport and any other international travel documents.

* Must stay outside of D.C. except for court hearings and meetings with attorneys.

* Will be permitted to travel within the continental United States with notice to pretrial services.

* Schaffer cannot possess any firearms or explosive devices, including legally owned firearms. Any firearms must be removed from his home.

"On this 100th day since the horrific January 6 assault on the United States Capitol, Oath Keepers member Jon Schaffer has pleaded guilty to multiple felonies, including for breaching the Capitol while wearing a tactical vest and armed with bear spray, with the intent to interfere with Congress's certification of the Electoral College results," said acting deputy attorney general John P. Carlin. "The FBI has made an average of more than four arrests a day, seven days a week since January 6th. I commend the hundreds of special agents, prosecutors and support staff that have worked tirelessly for the last hundred days to bring those who committed criminal acts to justice."

"The defendant in this case admits forcing his way into the U.S. Capitol on January 6 for the express purpose of stopping or delaying congressional proceedings essential to our democratic process. These actions are disgraceful and unacceptable" said FBI deputy director Paul M. Abbate. "The FBI and our partners will continue to utilize all available authorities to aggressively investigate, pursue and hold accountable those who committed acts of violence or otherwise violated the rule of law that day."

In his plea agreement, Schaffer acknowledged he is a founding lifetime member of the Oath Keepers, a large but loosely organized collection of individuals, some of whom are associated with militias.

In his plea agreement, Schaffer also acknowledged that on January 6, 2021 he was in Washington to attend the "Stop The Steal" rally at the Ellipse in Washington, D.C. to protest the results of the presidential election, which he believed were fraudulent. Schaffer wore a tactical vest and carried bear spray, a dangerous weapon and chemical irritant used to ward off bears. When the rally finished, Schaffer joined a large crowd that marched from the Ellipse to the Capitol, where a joint session of Congress, presided over by Vice President Michael Pence, was in session to certify the electoral college vote results. Shortly after 2:00 p.m., members of the mob forced entry into the Capitol building, disrupting the joint session and causing members of Congress and the Vice President to be evacuated from the House and Senate chambers.

Schaffer pleaded guilty to a criminal information charging him with obstruction of an official proceeding and entering and remaining in a restricted building or grounds with a deadly or dangerous weapon. Combined, he faces up to 30 years in prison if convicted. The Honorable Amit P. Mehta accepted Schaffer's guilty plea.

As part of the agreement, the Justice Department has offered to sponsor Schaffer for the witness protection program, Mehta noted.

The 53-year-old musician is the first Capitol riot defendant to reach a plea deal.

In January, German daily newspaper Die Welt uploaded a video interview it conducted with Schaffer last November at a Washington, D.C. demonstration supporting Donald Trump and protesting the 2020 presidential election results. In the chat, the guitarist said that "a group of thugs and criminals hijacked this country a long time ago" and warned that "they're messing with the wrong people here. Because now we see you, and you're going down. Mark my words."

Schaffer also seemingly threw his support behind Trump, saying "he's not your typical Republican" and claiming that America's 45th president was "dealing with a criminal mafia that has been in the shadows running the world, frankly, for a very long time. They wanna destroy all of our sovereignty and bring about global government," he added. "We're not having it… It will not happen. There will be a lot of blood shed, if it comes down to that — trust me. The American people will not go for that bullshit — once they understand what's actually happening. So, that's where we're at. Nobody wants this, but they're pushing us to a point where we have no choice." 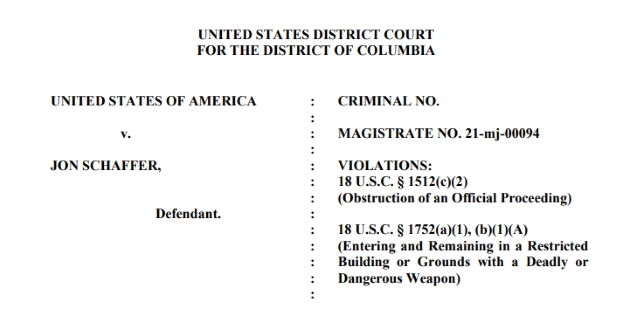 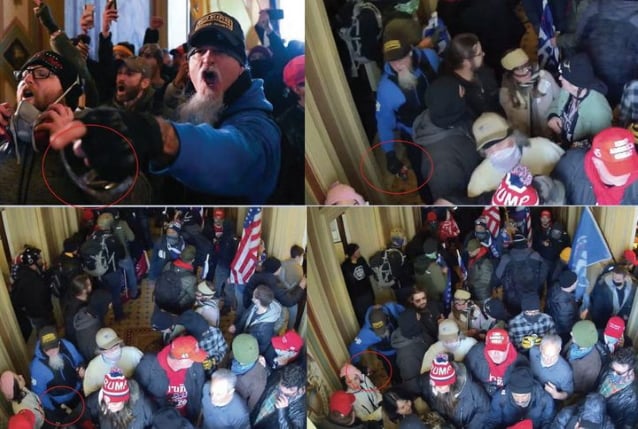 Not everyone lol. We didn't spot Jon Schaffer 1️⃣ anywhere near the other 45 #OathKeepers on 1/6. We did see him next to Kelly 2️⃣ & Connie Meggs 3️⃣ in DC before. So there's a possibility he has some damaging info abt Stewart Rhodes or other (local) leaders.https://t.co/RedMzxCBTbpic.twitter.com/lMHjY3g06A

Kelly and Connie Meggs are members of the Oath Keepers militia who used the chaos around the U.S. Capitol riot to enter the building in an organized “stack.” To readers of the right-wing blog The Gateway Pundit, though, the Meggs are just humble farmers. https://t.co/hQa0GlYYw2