According to The Republic reporter Jordan Morey, ICED EARTH guitarist Jon Schaffer is scheduled to appear in a Washington D.C. court today (Friday, March 19) for an initial hearing on charges filed regarding his alleged involvement in the January 6 insurrection at the U.S. Capitol.

Schaffer, who is being held in the Washington D.C. Jail, is expected to appear before Magistrate Judge Zia M. Faruqui for a video teleconference at 12:30 p.m.

Court documents show he was originally scheduled to appear before the court on Thursday, but was unable to due to processing at a D.C. jail. He is currently being held without bond.

The 53-year-old musician, who resides in in Edinburgh, Indiana, is facing six federal criminal charges after he was accused of spraying a police officer with a pepper-based bear repellant during the insurrection at the U.S. Capitol.

Less than two weeks ago, Schaffer's attorneys filed a motion to dismiss the charges against the guitarist for his involvement in the insurrection. Court documents filed on March 9 request that he be released immediately under the claim that the government has violated the Speedy Trial Act, which establishes maximum time periods for different stages of a federal criminal prosecution. Since the Speedy Trial Act required the government to file an information or an indictment within 30 days of Schaffer's arrest, the "complaint must be dismissed," Schaffer's attorneys wrote.

Two months ago, government lawyers asked the judge to not offer Schaffer a bond when he goes in front of U.S. magistrate. 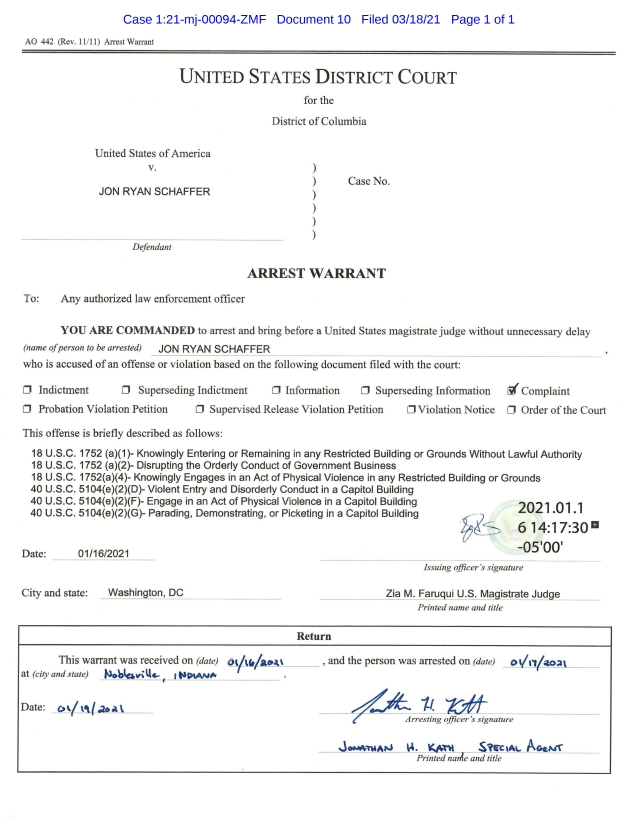