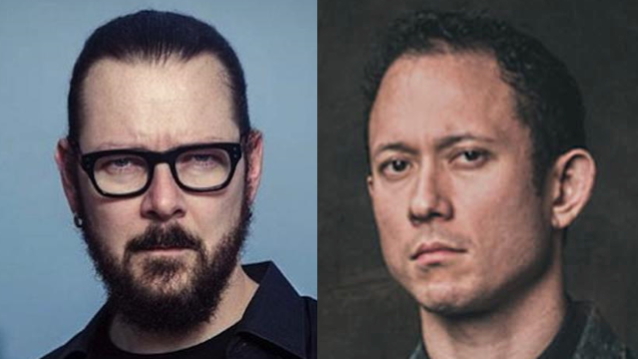 MRITYU, the experimental black-metal side project of TRIVIUM frontman Matt Heafy, is "making great progress" on its long-awaited debut album. The disc is being produced by EMPEROR frontman Ihsahn, who wrote in an Instagram post earlier today (Monday, June 15): "It's #mrityumonday and me and @matthewkheafy have been tracking some killer vocals in @cubase.pro through #vstconnectpro by @steinbergmedia! The current situation prevents us from traveling, but with this technology it is almost like we're in the same studio. Matt is absolutely killing it and we're making great progress every session!! #mrityu #newmusic"

Back in 2015, Heafy told Revolver magazine about MRITYU: "MRITYU was initially intended to be a black metal band that I was never going to tell anybody I was in. I was going to make the music, and it was going to be pretty true to the '90s second wave-style-black metal — sort of like DARKTHRONE, early DIMMU BORGIR, early EMPEROR. But while MRITYU has its roots in black metal, it's become something so much more. It's not just black metal — it's anything I've ever wanted to try. Ihsahn from EMPEROR will be producing it, and he's co-written several songs with me. We'll also be recording it in Notodden, Norway, where all the EMPEROR records were done. It's just a matter of when. Ihsahn is incredibly busy and so is TRIVIUM. But he and I stay in contact and we pass things back and forth. And we have quite a few songs written and quite a few demos. It's going to be a dream come true when it happens."

It’s #mrityumonday🤘and me and @matthewkheafy have been tracking some killer vocals in @cubase.pro through #vstconnectpro by @steinbergmedia! The current situation prevents us from traveling, but with this technology it is almost like we’re in the same studio👌 Matt is absolutely killing it and we’re making great progress every session!! #mrityu #newmusic