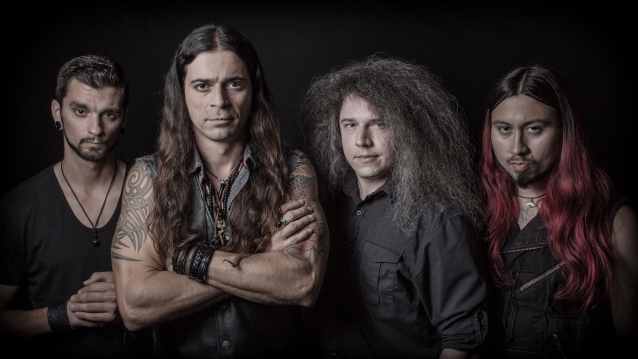 The Texas-based extreme progressive/power metal group IMMORTAL GUARDIAN has been described as "seriously epic" (MetalSucks),so it's only fitting that the group's new music video for the song "Stardust" fits that same description. A riveting, special effects-laden five-minute hybrid of an "Armageddon"-like action movie and a telenovela, the clip can be seen below.

Featuring special effects by the Russian VFX company Great Heights Design (WITHERFALL, NIGHTRAGE, NOCTEM),"Stardust" was filmed last year on location in the West Texas desert. It stars vocalist Carlos Zema and Brazilian actress Bella Carrijo, a childhood friend who has starred in several independent films and Netflix original series. The on-set chemistry between the two was genuine, as just six months after the video was filmed, the pair were married.

On camera, however, IMMORTAL GUARDIAN was determined to avoid traditional cliches and make a music video to remember. To that end, the group — founded by Gabriel Guardian, whose uncanny ability to play guitar and keyboard simultaneously has been showcased on MTV and during a recent guest stint on tour with POWERGLOVE — takes the viewer on an intense roller coaster that spans from the desert to outer space, with an ending twist that leaves the viewer suspended in disbelief.

The "Stardust" video is another feather in the cap for IMMORTAL GUARDIAN, whose acclaimed full-length debut, "Age Of Revolution", was recently on limited-edition blue/black vinyl. (Copies are available via the M-Theory Audio webshop and Bandcamp.) Last month, the group embarked on a national tour with metal guitar icon Marty Friedman (MEGADETH, CACOPHONY).

In support of their EPs, the group has made jaws drop on stages in not only their home state — where they've performed alongside some of the biggest names in metal, including JUDAS PRIEST, DRAGONFORCE, KAMELOT, SYMPHONY X, SONATA ARCTICA, SLAYER, METAL CHURCH, SOILWORK and Steve Vai — but also abroad in countries such as Brazil and Russia, and during high-profile performances at ESPN's X Games, South By Southwest and the Fun Fun Fun Fest.

In addition, Gabriel Guadian has developed an extensive following on YouTube, where his unique dual-instrument covers of classics by the likes of IRON MAIDEN, PANTERA and GUNS N' ROSES have garnered hundreds of thousands of views. His virtuosity was also recently showcased on the MTV program "Amazingness".