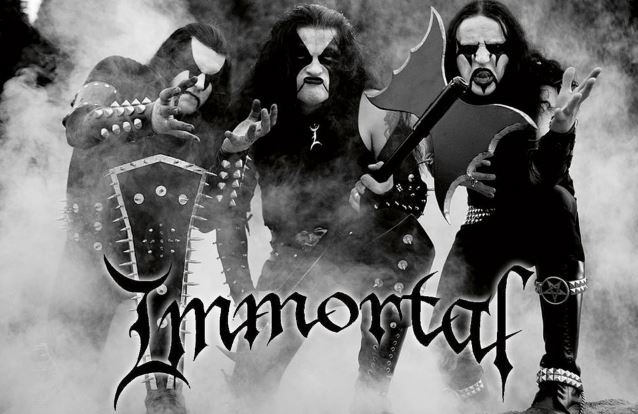 According to Dagbladet.no, members of the legendary Norwegian black metal band IMMORTAL are embroiled in a legal battle over the IMMORTAL trademark. The group's frontman Abbath (real name Olve Eikemo) has attempted to claim rights to the IMMORTAL name via his sole proprietorship Eikemo Compositions. The application has been stopped by a lawyer representing lyricist/guitarist Demonaz (real name Harald Nævdal) and drummer Horgh (real name Reidar Horghagen),who want the IMMORTAL trademark to be shared by all three members.

Abbath has until this Friday (December 12) to respond to the opposition before the Norwegian Industrial Property Office rules in the matter, which will probably happen in January or February.

Speaking to Lords Of Metal in 2009, Demonaz clarified his status with IMMORTAL. "It's my band!" he laughed. "Me and Abbath started this band, and I got problems with my arms back in 1997. Instead of finding another guitar player, Abbath just took over the guitar and we went for a new bass player. But I still tour with the band, you know."

In a 2008 interview with Guitar World magazine, Abbath spoke about IMMORTAL's 2003 split, which at the time was attributed to "personal reasons." He said: "Of course, it was for personal reasons. The band is personal. We are a family. We are brothers. It's like a marriage. When you marry someone, you believe in it. You want to continue it, but sometimes you need a break. A lot of bands just milk it. We could've continued and made a lot of money, but I've never done this for the money or the fame. All that stuff means nothing if you don't have the spirit inside. And we were starting to lose it a little. We're not stupid. We are very smart when it comes to our shit. We think long term. To quote Paul Stanley, 'KISS is not the latest trend, it's a lifestyle.' Same thing with IMMORTAL. It's our life."

Asked about the fact that Abbath and Demonaz were actually brothers-in-law at one point, Abbath said: "Yes, I was married to Demonaz's sister, and I have a [teenage] son with her. She's still one of my best friends. So Demonaz and I are really like a family. There's no fucking around. Demonaz is my brother. I'm an only child. He has two sisters but no brother. But we have each other. Family is important. We have strong bonds."