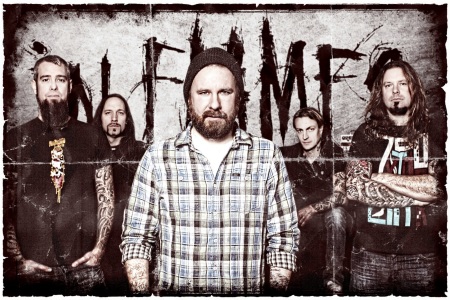 Engelin has been touring with IN FLAMES for the past couple of years as the replacement forJesper Strömblad, who quit the band in February 2010 in order to continue receiving treatment for his alcohol addiction.

The first official photo of the new IN FLAMES lineup can be viewed below.

IN FLAMES has set "Sounds Of A Playground Fading" as the title of its upcoming tenth album, tentatively due in May. 13 songs were laid down for the CD, which was recorded at the band's IF Studios in Gothenburg with engineer Roberto Laghi (HARDCORE SUPERSTAR, LOK, SONIC SYNDICATE). The group states, "We are very happy with the result."

IN FLAMES's latest album, "A Sense of Purpose" (2008),shifted 20,000 copies in the United States during its first week of release. This was slightly less than the opening tally of "Come Clarity" (Ferret),which sold just under 24,000 copies in February 2006 to debut at position No. 58.

Good Fight Music is the new North American label home for the classic IN FLAMES catalog, starting with "The Jester Race" through "Soundtrack To Your Escape". These titles, which until recently were unavailable in the marketplace, were put back on music retailers' shelves and made available at digital stores (iTunes) on November 22, 2010.