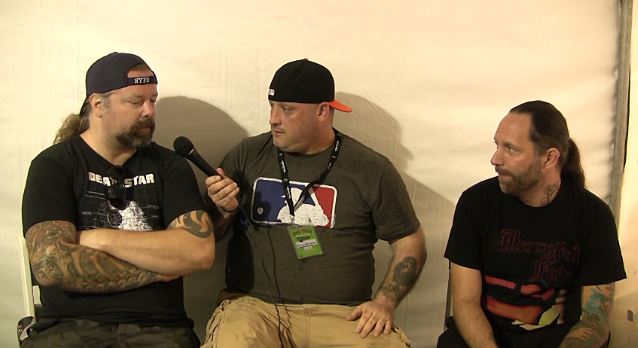 Soundcrave magazine conducted an interview with Niclas Engelin (guitar) and Peter Iwers (bass) of Swedish metallers IN FLAMES at this year's Rock On The Range festival, which was held May 15-17 at MAPFRE Stadium (formerly Crew Stadium) in Columbus. You can now watch the chat below.

Speaking about IN FLAMES' latest album, "Siren Charms", Peter said:"We've been touring for it for about eight months now, and the new songs really blend very well into the set, I feel, and I kind of stopped thinking about them as new songs. They're just songs now. I'm very comfortable with them."

Asked if IN FLAMES is the kind of band that believes its most recent albums are the band's best, Peter responded: "You kind of have to think like that, because the latest stuff you did is… Obviously, you always wanna try and top yourself from the last album. I think when the whole career is over and you lay out all the albums in front of you, it might be easier to choose a favorite, but the latest stuff is always the freshest and the stuff that you believe in the most, I would say. But I'm very proud of the old albums too, obviously."

"Siren Charms" sold around 9,000 copies in the United States in its first week of release to debut at position No. 26 on The Billboard 200 chart. The CD was released in the U.S. on September 9, 2014 via Sony/RED. The effort was recorded at Hansa Tonstudios (DAVID BOWIE, DEPECHE MODE, U2) in Berlin, Germany. The cover artwork was created by Blake Armstrong of Space Boy Comics.