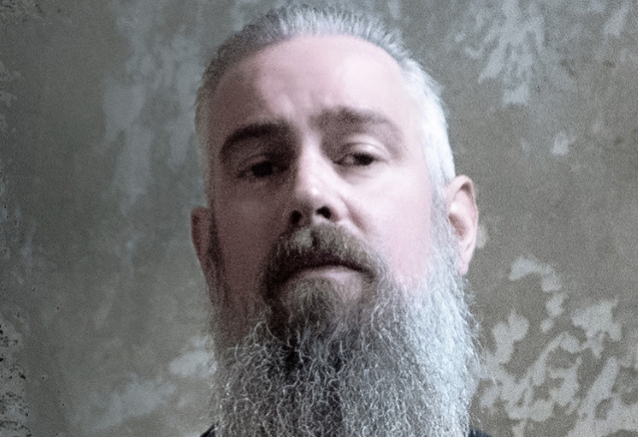 IN FLAMES' BJÖRN GELOTTE On Coronavirus Crisis: 'This Won't Affect The Love Or The Passion For What We Do'

IN FLAMES guitarist Björn Gelotte spoke to Australia's Heavy magazine about how he is dealing with the coronavirus crisis and what the touring circuit might look like post-pandemic. He said (hear audio below): "It's been weird. The first couple of weeks, I felt like I was skipping school or something. I was, like, 'I'm supposed to be somewhere, and I'm not, and that feels [strange]. But then I realized that everyone I know, everybody in music, everybody who's a fan of music, everybody's in the same position here — we're all in the same boots. So it felt weird in the beginning, but after the first couple of weeks, it was just the realization that this is the way the world is right now, and you just deal with it. You try to stay safe, and your loved ones, you try to keep them safe as well.

"There's always next year," he explained. "We've been around for such a long time, this won't affect the love or the passion for what we do. I think it's more a matter of [it being] like a non-existing year for most bands right now. And we started planning right away — we moved everything a year ahead, basically. It's interesting, though. It's the first time we actually had a full plan for the full year, and, of course, this shit happens."

Asked if he has written any new music while he has been in quarantine, Gelotte said: "I haven't really been productive when it comes to music. Basically, I've tidied up and polished things around in the studio I have at home — updated all the software and got all the stuff that I wanted to get done that I never had time to. I've written some stuff, but it was mainly just to try out [the new software]. I've [been] hanging with the family, obviously, I've done a lot of painting — all the things that you kind of miss when you're on tour, all those things. But it gets sort of watered down after a while, because now I can do all the things I really long for, but I can do 'em all the time, and I can't do what I'm supposed to do. So it's been kind of weird.

"When you have a break that you've chosen to have, then it's different, because then you look forward to it," he said. "My mind was on touring. It's a nice place to be, in that mindset, and when that gets taken away from you, the air kind of goes out of you."

A special 20th-anniversary edition of IN FLAMES' "Clayman" album will be released on August 28. "Clayman 20th Anniversary Edition" comes entirely remastered by Ted Jensen (PANTERA, DEFTONES, GOJIRA) and features all-new artwork in a 16-page booklet, a brand-new instrumental medley plus four re-recorded versions of fan favorites such as "Only For The Weak" and "Pinball Map". Re-recorded songs were produced by Howard Benson (MY CHEMICAL ROMANCE, MOTÖRHEAD) and mixed by Chris Lord-Alge (GREEN DAY, ROB ZOMBIE). The record will be released digitally as well as on CD digipak and a 2xLP colored vinyl packaged in a deluxe trifold that includes an oversized booklet, 11 remastered tracks on a 12-inch record and five bonus tracks on a 10-inch record in a printed sleeve.

Preceding the physical release of "Clayman 20th Anniversary Edition", IN FLAMES has digitally released the "Clayman 2020 EP", which features the 2020 versions of "Only For The Weak", "Bullet Ride", "Pinball Map", "Clayman" and a new instrumental track, "Themes And Variations In D-Minor".