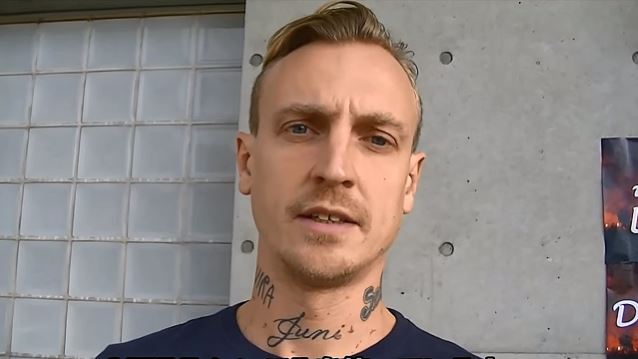 Drummer Daniel Svensson of Swedish metallers IN FLAMES has announced his departure from the band to focus on his family life.

His statement reads as follows:

"Time to turn the page…

"I have decided to close my chapter in IN FLAMES after finishing up this current tour.

"It has truly been a fantastic journey and I want to thank Anders, Björn, Peter, Jesper and Niclas from the bottom of my heart for all great memories and experiences that we've shared during the last 17 years (!) together.

"It's hard to leave what have become my second family, but now it's time for me to take care and spend more time with the most important people in my life — my wife and my three daughters.

"Perhaps some of you of will see me again, as I will start my very own brewery in a very near future. Something I am just as passionate about as IN FLAMES.

"I wish my friends in the band, the whole crew and everyone that’s working for IN FLAMES the very best in the future.

"To you, all fans around the world, I want to say, thank you, massively, for all the support you have shown during my years in the band."

In a 2014 interview with Metal Ignition, Daniel stated about his drumming approach on IN FLAMES' latest album, "Siren Charms": "This time, on 'Siren Charms', most of the songs weren't even written when we entered the studio, so I really had to push myself, 'cause I only had two weeks to record all the tracks and come up with fills and stuff like that. But when [IN FLAMES guitarist] Björn [Gelotte] has a riff, or presents a riff, we both know how the drums should sound like for it to be 'IN FLAMES-ish.' And then I try not to overplay and make too many weird and fast drum fills. I try to make them more melodic and fit the music more than [make them] fast or whatever. I think it's easy to ruin a song, or ruin the balance of a song, so you have to try to write tasteful fills. And that's my approach [to] drumming."

"Siren Charms" sold around 9,000 copies in the United States in its first week of release to debut at position No. 26 on The Billboard 200 chart. Released in the U.S. on September 9, 2014 via Sony/RED, the CD was recorded at Hansa Tonstudios (DAVID BOWIE, DEPECHE MODE, U2) in Berlin, Germany. The cover artwork was created by Blake Armstrong of Space Boy Comics.