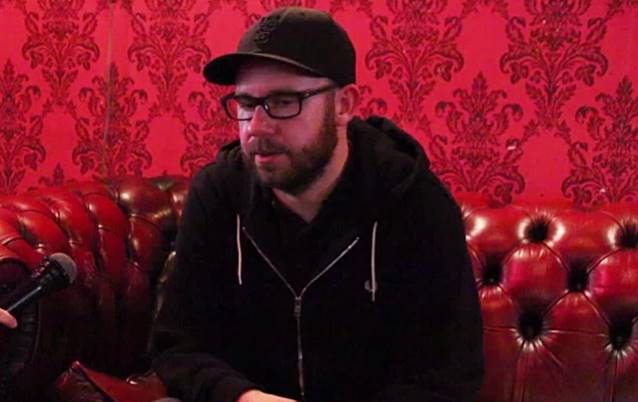 IN FLAMES Frontman ANDERS FRIDÉN: 'We Will Never Do A Country Album'

In a brand new interview with AltPress.com, vocalist Anders Fridén of Swedish metallers IN FLAMES was asked about the direction of the band's new album, "Siren Charms", compared to that on 2011's "Sounds Of A Playground Fading".

"We don't sit at a round table and say, 'We should do this. We should do that.' It just happens. We just wanna make a good album, basically. When I get the music, I just fly with it and do my thing. It's like I get an 80-pecent complete painting and I use my brush and my colors. Björn [Gelotte, lead guitarist] and I never talk like, 'Now we should do this song. Now we should do that song.' It's just, 'Does this feel good?' We don't really look into what other bands do and what other people say we should do.

"I think we are the worst band for A&R people. It must be scary. [Laughs]

"My record company asked me before, 'Do you have any songs?' And I was like, 'Yeah, we got songs. Don't worry.' Obviously, we didn't. We don't let anyone into the studio apart from producers. Friends come and go, but they don't have any say.

"We don't have a record company saying, 'Do this! You need this type of song!' We always stay close to our own hearts and try to incorporate what we're known for, which is melody and aggression. We blend that all kinds of ways."

He added later in the interview: "I wanna challenge our listeners a little bit. They shouldn't know exactly what they're gonna get. They're definitely gonna get IN FLAMES in some sort of way, but I don't wanna do 'Whoracle' or 'Jester Race' part 2.

"We're not a big planning type of band. It's metal, it's rock 'n' roll; let's do whatever.

"When I got into the metal scene and first heard of punk rock and metal, for me, it was, like, 'Whoa! There are no rules! You can do whatever you want.' Then, when I started playing in bands, all of these rules were told to me. What? Can I not do what I want? I have to be this person to be part of this scene. I cannot look this way? To me, you can do whatever you want. I can promise you one thing: We will never do a country album."

Speaking about what he was trying to do vocally this time around, Anders said: "I just had to do what I did this time. Live, I still like to scream. You get an energy from your fans. But standing in front of that mic, I just didn't feel like doing it the same way. Some songs I do, but most of the songs are in a different vocal style. It's also a conscious decision. It happens because the songs need that sound. It doesn't mean I won't scream. I still love the screaming. I'll probably do it on another album. I might be a little bit angrier in another two years."