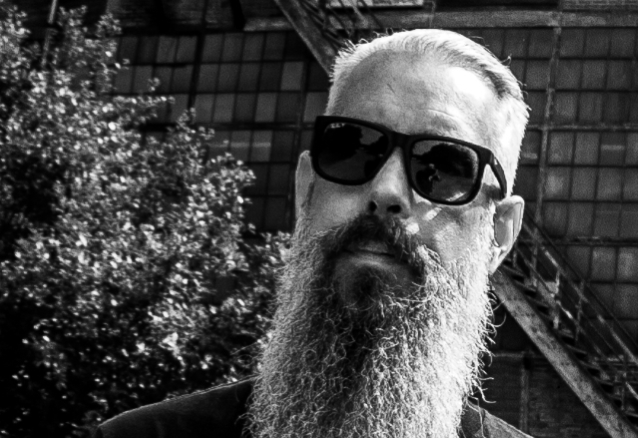 In a recent interview with Joshua Toomey and the "Talk Toomey" podcast, guitarist Björn Gelotte of Swedish/American metallers IN FLAMES spoke about how he and his bandmates got through the early days of the coronavirus pandemic. He said (as transcribed by BLABBERMOUTH.NET): "Sweden was trying to not close down, so what they would do is restrict certain things. But in effect, it was basically closed down. We didn't have any martial law or any curfews or anything like that, but restaurants couldn't serve after a certain hour. But I think that we got it lightly compared to parts of the world.

"Everything we are as a band and as people is surrounding music — touring, recording, writing, talking about it, traveling, all that shit — everything just disappeared overnight," he continued. "It felt like overnight.

"We flew down to New Zealand for a show. We came down there — it's literally the other side of the planet. We got there and heard that we can't play and we can't possibly leave the country either; they were shutting down everything. And we had a few hours. And we managed to get out of the country. It was nothing that anybody really could foresee, obviously, so we weren't ready for it.

"I felt like shit the first couple of months," Björn admitted. "I felt isolated. I felt useless. I felt like I had no purpose. And that's a weird feeling, being my age and having done this for such a long time. So it was obviously frustrating. But eventually things started to — I wouldn't say 'loosen up,' but people got their heads around the situation, so socially it became less isolated. So we started hanging out, even if it wasn't in big groups or anything. We started jamming with friends and stuff. Music slowly came back to life, and eventually we could see some sort of light in the tunnel. At least we could keep our motors running by writing, creating, and put some of this negativity — turn it into something positive. Yeah, kind of distill those weird times and feelings into new music. And that's what happened."

IN FLAMES will release its fourteenth studio album, "Foregone", on February 10, 2023 via Nuclear Blast. The LP will feature the two songs IN FLAMES released earlier this year, "State Of Slow Decay" and "The Great Deceiver".

IN FLAMES performed "State Of Slow Decay" — which was produced by Howard Benson, mixed by Joe Rickard and mastered by Ted Jensen — live for the first time in June at the Sweden Rock Festival in Sölvesborg, Sweden.

In early July, singer Anders Fridén told Chaoszine about the songwriting process for the new IN FLAMES album: "Me and Björn, we live on different sides of [Sweden] — he lives in Gothenburg; I live in Stockholm — and we only saw each other once or twice during the whole pandemic. But towards the end, when we kind of felt like it's gonna open up for real, we started talking and then we decided to take a trip to the U.S. and just get the machine rolling again — write some stuff; just get things out of our system. So we spent some time — like, three weeks — in L.A. And then we flew home and had Christmas and so on, and then we flew back again and started recording stuff for real. But as soon as we got together, a few weeks in the writing process, it felt like it always has."