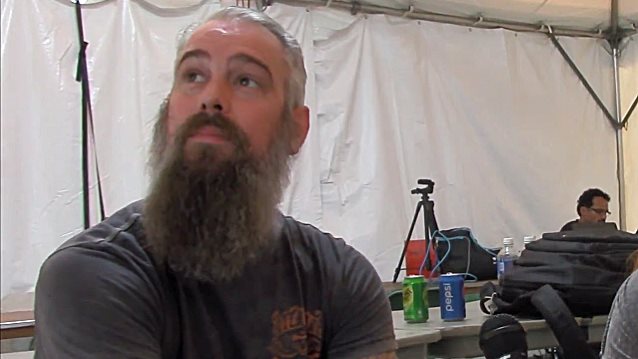 IN FLAMES Guitarist: 'We Wanna Create Music That We Think Is Challenging, Fun, Interesting'

Kristyn Clark of Pop Culture Madness conducted an interview with guitarist Björn Gelotte of Swedish metallers IN FLAMES at this year's Rock On The Range festival in Columbus, Ohio. You can now watch the chat below.

Speaking about IN FLAMES' experimental approach to songwriting and making albums, Björn said: "We get a bit of flak for that, not doing the same album over and over, but it's never been our thing. It's not what we wanna do. We wanna create music that we think is sort of missing out there or that feels challenging, fun, interesting and that we wanna hear ourselves. And it doesn't please everyone, but that's not why we're here. I can't please everyone; I can't make sure everybody in this audience likes what I'm doing. What I can make sure is that the five of us are happy with it. And when we are, it's gonna be an IN FLAMES tune."

IN FLAMES has recruited Bryce Paul — a member of the Southern California pop-rock outfit IVES — to play bass for the band on their current U.S. tour, which includes a number of headlining shows and festival appearances.

Longtime IN FLAMES bassist Peter Iwers quit the band in November saying that he was leaving IN FLAMES "to pursue other endeavors." His replacement for some of the recent European shows was Håkan Skoger, who had previously played with PASSENGER and GARDENIAN.

"Battles", IN FLAMES' twelfth studio album, was released in November via Nuclear Blast in all territories excluding North America and Scandinavia and Eleven Seven Music Group in the U.S.