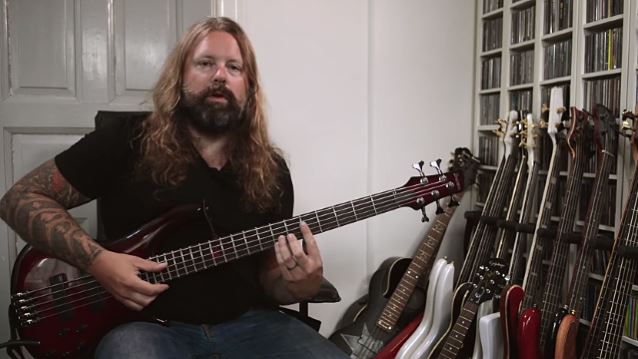 Nev Pearce of Australia's "Rabid Noise" podcast recently conducted an interview with bassist Peter Iwers of Swedish metallers IN FLAMES. You can now listen to the chat in the YouTube clip below.

Asked what the worst stage injury was that he ever suffered, Iwers said: "We've gotten all kinds of stuff thrown at us. In some places, it's considered good luck to throw pennies at [the musicians on the stage]. I cannot think it's so much good luck when it hits you in the eye and stuff like that. I've gotten bottles thrown at me. At one point, I got a big box of Altoids in my forehead, and it made me start to bleed and stuff like that. First of all, that sucks when that happens, 'cause you're on stage, you're out there just playing and having a good time and if somebody throws something, that kind of sucks. But at the end of the day, so far, we've gotten away and we still have our health so I still feel blessed to be able to do what we do."

IN FLAMES' new album, "Siren Charms", sold around 9,000 copies in the United States in its first week of release to debut at position No. 26 on The Billboard 200 chart.

"Siren Charms" was released in the U.S. on September 9 via Sony/RED. The CD was recorded at Hansa Tonstudios (DAVID BOWIE, DEPECHE MODE, U2) in Berlin, Germany. The cover artwork was created by Blake Armstrong of Space Boy Comics.