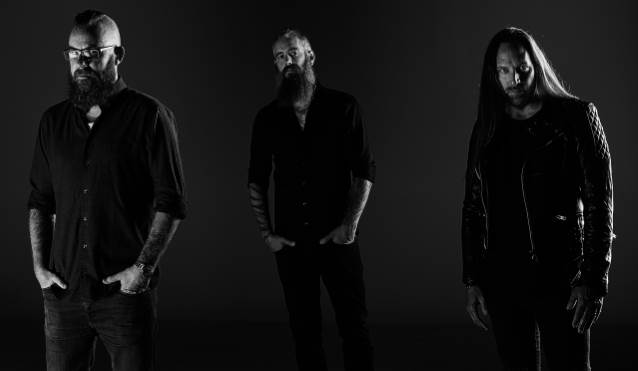 Swedish metallers IN FLAMES have recruited American drummer Tanner Wayne, best known for his work with UNDERMINDED, SCARY KIDS SCARING KIDS and CHIODOS, to sit behind the kit for the band for their summer 2018 live appearances.

Wayne has stepped into IN FLAMES following the apparent recent departure of Joe Rickard, who played on the band's latest album, 2016's "Battles".

Tanner made his live debut with IN FLAMES last night (Wednesday, July 4) in Brno, Czech Republic. Fan-filmed video footage of the concert can be seen below.

Rickard told Grasser Production in a 2017 interview that he landed the IN FLAMES gig because he was "probably [in the] right place at the right time. I had taken a little break from touring for a while and I was doing a lot of session work and studio work and things like that. And so it was just a normal thing for me to come in and do a drum session for a band. And so [producer] Howard Benson hired me to work on the album, play drums on the album, things like that. So, for me, it was just another project. Obviously, I was excited about it, but it was just another thing. So I had no idea that they were wanting to hire an American to be in the band and that they would be interested in me. I just did my best and had fun making the abum, and we had a great time while they were there. There was tons of barbecue and VAN HALEN; that's basically what they did the whole time. And so it was very unexpected when they asked me if I would wanna do it. And, of course, you say 'yes' when IN FLAMES ask you to be their drummer. You don't really say 'no' to that."

IN FLAMES' current lineup features American bassist Bryce Paul, who has been playing most of the shows with the group since the November 2016 departure of longtime bassist Peter Iwers.

IN FLAMES spent the last few months working on the follow-up to "Battles" for a tentative late 2018 release.