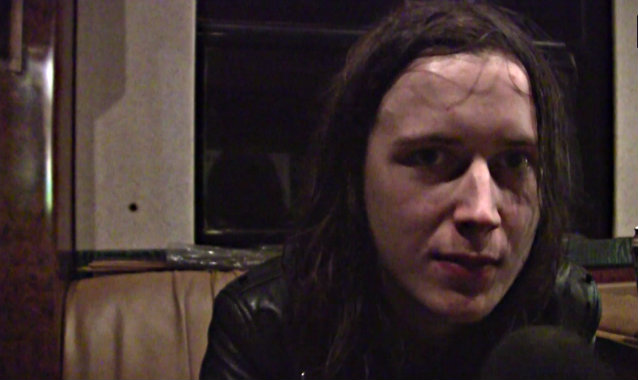 Capital Chaos TV conducted an interview with Pelle Åhman of Sweden's IN SOLITUDE on October 25 at Oakland Metro in Oakland, California. You can now watch the chat below.

North American fans had an opportunity to see IN SOLITUDE earier this fall. The band supported WATAIN on the "Wild Hunt" tour beginning on October 8 in New York City. The tour also featured support from TRIBULATION.

IN SOLITUDE released its third album, "Sister", on October 1 in North America via Metal Blade Records. The CD was recorded this past March at Studio Cobra in Stockholm, Sweden and was produced and mixed by Martin "Konie" Ehrencrona. It stands as a logical next step above and beyond its predecessor, "The World.The Flesh.The Devil."

IN SOLITUDE's strength resides in its ability to craft dark and oppressive atmospheres within the auditory realm of classic heavy metal. "Sister" compounds this trademark sound further, beginning with the acoustic intro, "He Comes", and saturates the record in an aura of uniqueness; see "Lavender" and the title track. The album concludes with an eight-minute, driving, near trance-like opus that features guest guitarist Pelle Forsberg (WATAIN). Additionally, Jarboe of SWANS fame can be heard on "Horses In The Ground". Moods range from MERCYFUL FATE-esque guitar flavors, shadows of BLACK SABBATH, the heavy dissonance of SWANS, to straight-forward, ear worm riffs. In any case, one thing can be said for certain: their delivery is as genuine as it is impressive.