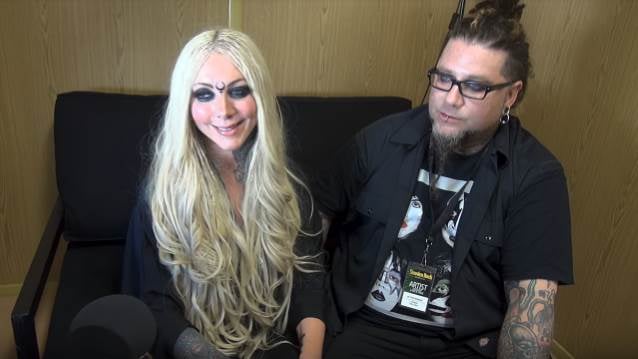 IN THIS MOMENT 'Didn't Have An Identity' Before 'Blood' Album

Martin TheSwedishLad conducted an interview with IN THIS MOMENT singer Maria Brink and guitarist Chris Howorth on June 7 at the Sweden Rock Festival in Sölvesborg, Sweden. You can now watch the chat below.

Speaking about the evolution of IN THIS MOMENT's sound since the band's 2005 inception, Brink said: "I think we both think up until 'Blood' [2012], we were just kind of… we were writing and we were just doing things, just kind of trying to figure it out, but we didn't have an identity. I think we were doing cute stuff. My lyrics were funny. Some of it's special, and there are some songs that are special, but I think from 'Blood' on is where we started letting go of what anyone thought and we started finding our identity and confidence and really seriously creating this thing."

Added Howorth: "We stopped caring what everybody thought. We always did what we wanted to do, but there was always this fear of just stepping outside of the box a lot. And when we were faced with that time when we [almost broke up], it was 'do or die' almost for us at the time, and we just said, 'Let's do it. Let's do whatever we wanna do.' And at that same time, [Maria] was kind of, like, 'I'm gonna stop using a handheld mic and I'm gonna start using a wireless mic.'"

Continued Brink: "In the metal world, if you're using a wireless mic… I was so scared to do that. I'm, like, 'They're gonna boo me in the beginning.' But when I hit this thing… when I had this liberating [moment], like I wanted to perform in a different way than everybody else, and I felt like I could do that if I was confident enough and powerful enough and I was doing it for a reason. And so we did it and it worked. But, again, it took us kind of getting to this place where we didn't care anymore — like, 'I don't care if I should scream or sing or not wear this. We're just gonna do what we want.' And when we started seeing that empowerment and everything, like, growing, we were, like, 'Okay. There's something to this.' And from then on, we've just been [following the same approach]."

IN THIS MOMENT is preparing to begin the songwriting process for its next studio album, tentatively due in 2019. The disc will be the follow-up to last year's "Ritual", which included the band's eerie cover of Phil Collins's "In The Air Tonight".