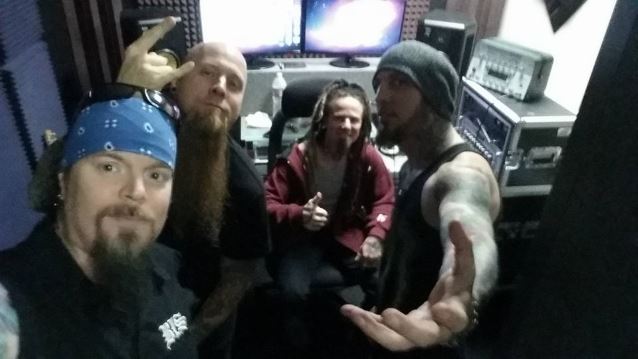 Former and current members of FIVE FINGER DEATH PUNCH, IN THIS MOMENT and SKINLAB have joined forces in a new band called INVIDIA. The group is currently putting the finishing touches on its debut album at a studio in Las Vegas with producer Logan Mader, who has previously worked with FIVE FINGER DEATH PUNCH, DEVILDRIVER, GOJIRA and CAVALERA CONSPIRACY, among others.

In a recent interview with Rich Inzinna and Paula Noto from "The S.I.R.E.N." radio show on iRadioUSA.com, Travis stated about how INVIDIA was formed: "This all came together super fast and super flawless. I guess stars kind of aligned, really. I put something up online and Brian hit me up. He said, 'Dude, I'd be totally down t do some work together,' and that kind of thing. And I was, like, 'You know what? I totally miss singing. And I'm totally down for that.'"

Regarding INVIDIA's musical direction, Travis said: "The heavy stuff is kind of ingrained from my upbringing with metal [and listening] to PANTERA and SLAYER and all that stuff. But, you know, [as I have been] branching out and getting older and enjoying good choruses, good songs and strong song structures and whatnot, I've kind of come to appreciate melody and that kind of thing as well. And as far as LIMP BIZKIT and stuff, I've always loved the rap-rock genre and just the tongue-in-cheek kind of 'fun-ness' of it. So we kind of took everything that we were influenced by and kind of put it in this project, and just not really pigeonholing it to any specific thing, doing what feels right. And we're all super happy with it. I mean, there's elements across the board that, I think, everybody's gonna dig and we definitely dig."

Added Brian: "I think there's gonna be a lot of people pretty surprised, honestly. There's so many different elements that are involved with this record, with all the different people, especially with Logan being involved; it's been amazing to work with him, having him help to co-write a lot of stuff, and he's bringing a lot of ideas to the table. It just all seems to be working."