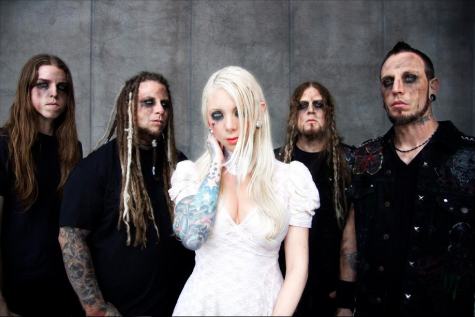 Andrew Haug and Christina Rowatt of Soundwave TV conducted an interview with vocalist Maria Brink and guitarist Chris Howorth of Southern California's IN THIS MOMENT during this year's Soundwave Festival in Australia. You can now watch the chat below.

IN THIS MOMENT recently headed in to the studio to begin work on its fourth album for longtime label Century Media Records. The band has once again tapped producer Kevin Churko (OZZY OSBOURNE, FIVE FINGER DEATH PUNCH) to helm the CD, which is slated for a summer 2012 release.

IN THIS MOMENT began work on the new album just a few months following the departures of drummer Jeff Fabb and guitarist Blake Bunzel, who left the band late last year in order to join the backing group of "American Idol" finalist James Durbin. Fabb and Bunzel have since been replaced by Tom Hane (THYATEIRA) and Randy Weitzel (FLATLINE, 3/13, AMERICAN MASSACRE),respectively.

Commented IN THIS MOMENT frontwoman Maria Brink: "There are no words to describe how excited we are... We are on fire with this record. It's by far the most powerful material we have ever written.

"IN THIS MOMENT has gone through some big changes. I admit sometimes change is scary, especially when facing the unknown, but in this case everything has been perfectly meant to be. It's a brave, dark, hard-hitting album that will make you feel dirty inside, but still wanting more."

Added guitarist Chris Howorth: "Over the last six months, we have undergone some interesting changes within the band. As a result, Maria and I were brought closer together united in our mutual determination to top everything we have previously done with IN THIS MOMENT. It's our fourth album and we definitely have something to prove this time. During the writing process Maria, Kevin and I are pushing ourselves to make sure every song is something unique and special. I honestly feel this is the most focused and powerful music we have ever created and I am beyond psyched to get it out there for people to hear."

In a recent interview with Australia's Loud magazine, Maria stated about IN THIS MOMENT's new material, "We brought some stuff to the table that we've never done before and it really sounds like something special, something new. I can't explain it; I mean, if you know our old music, when you hear the new stuff you're going to go, 'Holy shit, okay, I totally get it.' But I don't want to give away anything either, it's just unique; it's something new we've brought to the table. We found something special within us; we found this certain thing, so I'm excited for it."

Regarding IN THIS MOMENT's split with Fabb and Bunzel, Brink said, "You know how sometimes, you don't realize sometimes something happening (that's) traumatic, that it can be the most beautiful thing that could have happened to you? It's like one of those situations. It got really stripped back down to me and Chris [Howorth, guitar], and me and Chris started this band together, just me and him, and then it was like everybody came to the table, everybody brings their own influence. I believe it was all meant to be, all of those albums with them. I love them, I wish them the best. But it was almost like this new, with just me and Chris, this new fire, this new strength within me that I just… magical things started happening between what we started creating. And it's just so meant to be; it's meant to be that they moved on and some other things in my life, it's so cool 'cause it's just like this brand new everything and it feels really awesome. And you're going to be able to hear it."

IN THIS MOMENT took a short break from recording to play at the Soundwave Festival in Australia and has since returned to the studio. Upon completion of the new album and in advance of the summer touring season, the band will head out on a brief run of American tour dates in May including an appearance at Rock On The Range in Columbus, Ohio.

Fan-filmed video footage of IN THIS MOMENT performing a brand new song, "Blood", on March 2 at the Soundwave Festival in Melbourne, Australia can be seen below.