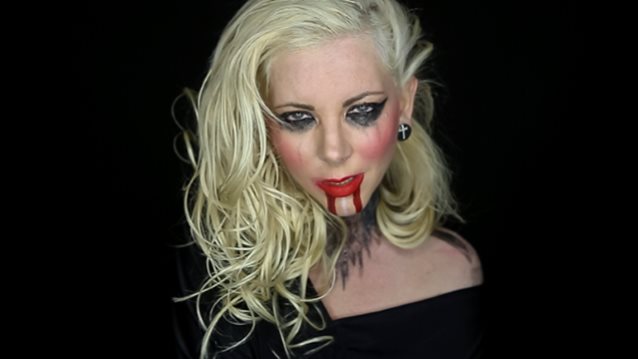 According to The Pulse Of Radio, IN THIS MOMENT vocalist Maria Brink has told Metal Hammer that she is mulling the possibility of doing her first solo album. Asked about her musical plans for 2018, Brink told the magazine: "I'm actually thinking, for the first time, of doing a solo album. I'm starting to slowly write, no hard plans. I'm not exactly sure when I'm gonna do it, but it'll be more of the obscure, intimate, quiet side of me."

Brink added: "Probably the only drums in it would be tribal drums and probably no distorted guitars. Just the softer side of me. That's who I am. Chris [Howorth, IN THIS MOMENT guitarist] would not want to do an obscure, artistic, dreamscaping album. That's not who he is."

Brink said that her solo performances would probably feature less theatrics, explaining: "It would be just me and a piano and one dress and candles all over the whole stage." She also said that the idea of performing without the band behind her "doesn't frighten" her. "It sounds amazing," she said. "I love change. I'm a Sagittarius and I love adventure and new beginnings, new experiences, because it makes me feel like I'm living.

"When I play piano by myself and sing, something really special happens. I connect to something that I love," she added.

"My favorite moment in our IN THIS MOMENT set is when I go out by myself to play a song on the piano. That would be me being able to do that for a whole intimate set, and I think it would fill my soul."

IN THIS MOMENT recently released a music video for the song "Roots", the latest track taken from the band's recently issued sixth studio album "Ritual".

In addition to the singles "Roots" and "Oh Lord", "Ritual" includes a cover of Phil Collins's "In The Air Tonight" and a duet with JUDAS PRIEST frontman Rob Halford called "Black Wedding".

IN THIS MOMENT will headline the "Witching Hour" tour early next year with P.O.D., NEW YEARS DAY and DED appearing on select dates. The trek kicks off on January 16 in Charleston, South Carolina and closes on February 18 in St. Paul, Minnesota.