Southern California's female-fronted hard rockers IN THIS MOMENT have just released the official lyric video for their latest single, "Whore". Check it out below.

While "Whore" has been getting traction at radio stations across the country, it was more important for the band to create a message that conveys the true intent behind the use of the "whore" word. Singer Maria Brink created the term Women Honoring One Another Rising Eternally to give new meaning away from the derogatory connotation of the "whore" word.

"I am so proud and excited for the world to hear 'Whore'. This is an honest and raw movement that needs to be heard!" exclaims Brink.

"The message behind this song is taking back control. It is about taking the power from a disgusting and degrading word and turning it back around on the accuser. It's about self-empowerment, love, and liberation."

The imagery the band has created around the release of "Whore" is just as provocative as the word itself, yet all goes back to the important message the band has created. Brink explains: "I decided to pose nude for the visual art for 'Whore' to evoke a raw vulnerable emotion. The word 'whore' written down my back, and the dunce cap symbolize me placing myself on the stake for those who are suffering and I can only hope to encourage at least one person to find the self worth and love they deserve to transcend out of a painful situation into a beautiful one. It is about finding our power and taking a stand.

"We are resilient beings and need to realize our incredible strengths.

"I will not bow down to others' perceptions of me; I will only rise in the name of art, love and music."

Adds IN THIS MOMENT guitarist Chris Howorth: "One of the best things about the song 'Whore' is all the feelings and thoughts that the word alone provokes, and that's great, but at the end of the day, it's just a word. The only power it really has is the power that we give it. It's really just about taking the power back from the word, and when you get past all the controversy of the word, you have a bombastic rock and roll song with crushing guitars and huge drums that will have you screaming whore at the top of your lungs! Listen with your heart!"

IN THIS MOMENT will return to headline status this fall as part of the first-ever Hellpop tour. The trek, which will also feature MOTIONLESS IN WHITE, KYNG and ALL HAIL THE YETI, will kick off October 24 in Tempe, Arizona and run through November 27 in Los Angeles, California. The 25-city tour will make stops in Houston, Texas; Orlando, Florida; Atlanta, Georgia; and Salt Lake City, Utah, to name a few. IN THIS MOMENT will also play a special Halloween show in Shreveport, Lousiana on October 31 which will be a spectacle not to be missed.

IN THIS MOMENT's fourth album, "Blood", debuted at No. 15 on the Billboard album chart and has sold more than 185,000 copies in the United States since coming out in August 2012.

IN THIS MOMENT professionally filmed its May 21 concert in Madison, Wisconsin for the group's first-ever live DVD. IN THIS MOMENT has partnered up with longtime supporter, radio station WJJO, as part of their Mayday Maylay concert series. The band had a bunch of surprises in store for this show, including rarely played songs from their catalog and an all-new stage show created specifically for this concert. 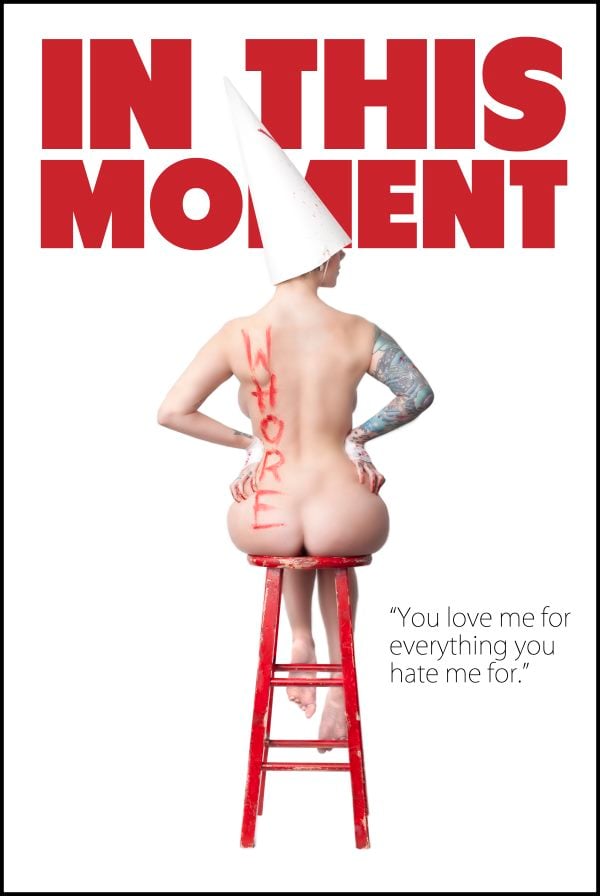