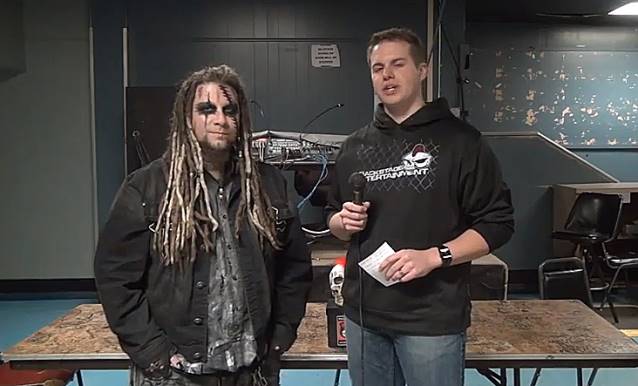 On November 20, Jeremy Lafrentz of Backstage Entertainment conducted an interview with guitarist Chris Howorth of Southern California female-fronted metallers IN THIS MOMENT at Sokol Auditorium in Omaha, Nebraska. You can now watch the chat below.

IN THIS MOMENT will kick off 2014 by launching the "Hellpop Tour II" across North America with support from BUTCHER BABIES, DEVOUR THE DAY and ALL HAIL THE YETI.

The 16-city trek will start January 2 in Portland, Oregon at the Wonder Ballroom and conclude on January 25 in South Florida, where the band will then embark on the ShipRocked cruise.

IN THIS MOMENT has just finished headlining the first leg of their "Hellpop Tour", which kicked off October 24 in Tempe, Arizona and ran through November 27 in Los Angeles, California.

IN THIS MOMENT's fourth album, "Blood", debuted at No. 15 on the Billboard album chart and has sold more than 195,000 copies in the United States since coming out in August 2012.

IN THIS MOMENT professionally filmed its May 21 concert in Madison, Wisconsin for the group's first-ever live DVD. IN THIS MOMENT has partnered up with longtime supporter, radio station WJJO, as part of their Mayday Maylay concert series. The band had a bunch of surprises in store for this show, including rarely played songs from their catalog and an all-new stage show created specifically for this concert.